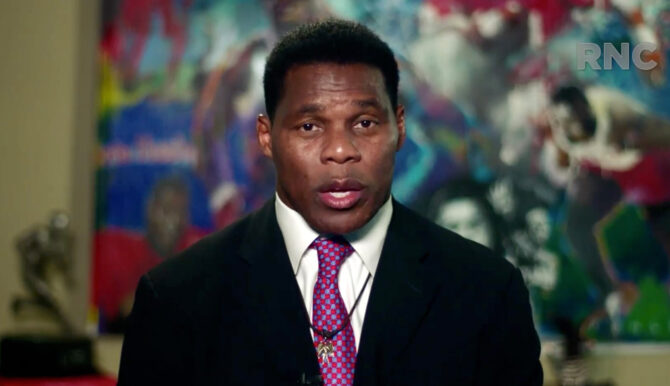 The Georgia GOP senatorial candidate has had a wild week, but the end doesn’t seem to be in sight. It turns out Walker’s “not-gay” son Christian (who admittedly likes men) isn’t the only Walker child on the down-low, according to reporting out of The Daily Beast.

After news broke yesterday of Walker’s estranged 10-year-old son, the former football player’s own campaign reached out and blew the story up even further.

Related: Just when we didn’t think Herschel Walker could be a bigger hypocrite, this happened…

The patron saint of paternity has actually been keeping three children hidden from the public eye, all born out of wedlock to different women across the country.

In an interview with right-wing duo Diamond and Silk, Walker posed the question, “What about teaching our Black men that if you lay down with a woman and you make a baby, it is your responsibility to stay there and make sure that child is raised?”

What about it, indeed?

There’s nothing wrong with unmarried people having kids (though being absent from a child’s life is not great), but the problem lies with Herschel Walker’s railing against “the fatherless home” specifically within the Black community.

His belief in the often homophobic rhetoric that every child is in need of a strong father figure in the household is densely hypocritical from a man with four children from different people; no man halfway to a full Nick Cannon roster should be on other folks’ cases about their parenting situations.

Even worse, his son Christian (the one of his four children that he is involved with) is one of the most vocally homophobic queer people in the public eye today. Anyone scrolling any of Christian’s highly-followed socials will find virulently queerphobic and extremist right-wing propaganda in nearly every post.

If Christian is the culmination of his father’s involvement in child-rearing, the three out-of-wedlock Walkers might just be better off.