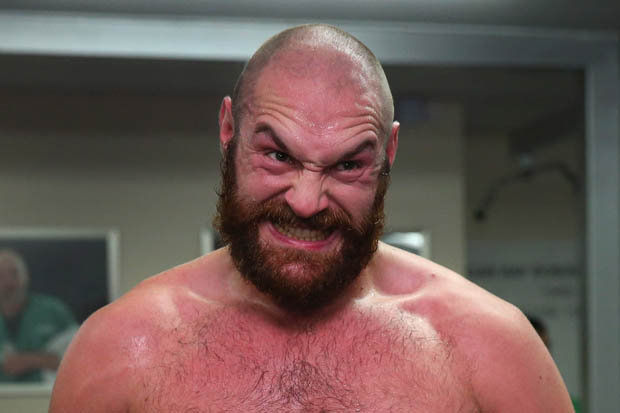 Tyson Fury. Remember him? He’s the heavyweight champion boxer and raging homophobe who was somehow nominated for the BBC’s Person of the Year Award back in 2015.

To make a long story short: Fury was suspended from boxing by UK Anti-Doping (UKAD) for two years in 2016 after getting busted with cocaine. His last fight was against Wladimir Klitschko, who he defeated in November 2015.

Some of Fury’s past homophobic stunts included saying that homosexuality and pedophilia will result in the apocalypse, claiming that sex with children was legalized in the U.K. by a fictional “Gay Rights Act 1977,” and posting a crazy video on social media spouting all sorts of racist, antigay, and anti Semitic nonsense.

This week, he was cleared to resume boxing after successfully petitioning to have his ban backdated, allowing him to return to the ring much earlier than he was originally supposed to.

Now, the 6’9, 29-year-old says he wants to put the “nightmare of the last two years” behind him and reclaim the world titles which he believes are rightfully his. (He was forced to surrender his belts after the drug scandal.)

“I won the titles in the ring and I believe that they should be lost in the ring, but I’m unable to defend at this time and I have taken the hard and emotional decision to now officially vacate my treasured world titles,” Fury says.

He continues, “I now enter another big challenge in my life which I know, like against Klitschko, I will conquer.”