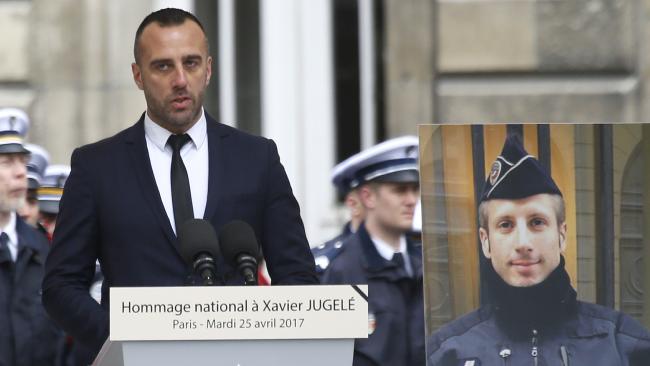 Étienne Cardiles is the husband of slain officer Xavier Jugelé. He delivered a powerful eulogy outside police headquarters earlier today.

37-year-old Jugelé was shot and killed during a terrorist attack on the Champs-Élysées last week. His killer was Karim Cheurfi, a 39-year-old Frenchman and ISIS member. Jugelé was posthumously awarded the Legion of Honor, one of France’s highest honors, and given the rank of captain for his bravery.

This morning, Cardiles told the hundreds of mourners outside the police headquarters that he harbored no hatred over the attack.

“I suffer without shame, you will not have my hatred,” he said, adding that the last time he communicated with his husband is via text message on Thursday.

Cardiles said Jugelé was happy to be stationed on the Champs-Elysées that day because it represented “the image of France” for him.

To Jugelé, Cardiles had this to say: “You will stay in my heart forever. I love you. Let us live with dignity and defend peace.”

Watch the emotional eulogy below.