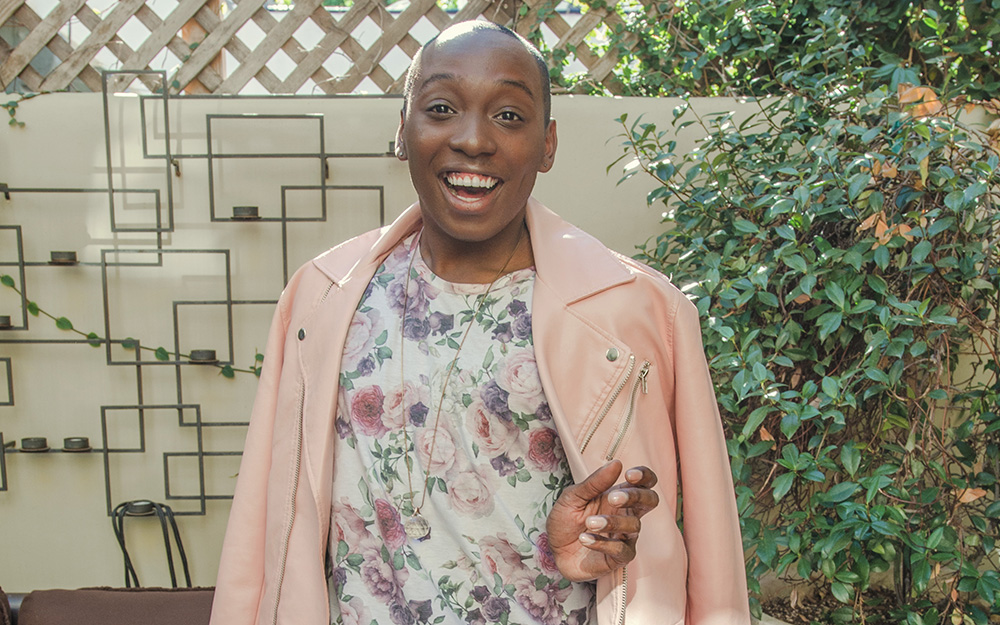 #SheHasHadIt, the Instagram of Jarvis Derrell, is the stream of consciousness of many a gay man observing the various styles of the “hot messes” encountered on New York sidewalks and subways with a creative mix of camp, slang and affection. The difference is that Jarvis actually snaps the photo and writes the captions. We, on the other hand, forget what we’d just seen and the mental notes we made at the time.

The results are an Instagram to envy: fabulous, funny, and sometimes even sad, emotions often evoked within in the same image/caption. The playful empathy Jarvis expresses is what keeps readers intrigued, earning plaudits from the media and celebrities like Marc Jacobs.

“It’s about telling people’s stories,” Jarvis insists. “Even if they’re just made up in my head.”

On first glance, it’s easy to think Jarvis is ridiculing his subjects. But nothing could be further from the truth. Instead he’s making the world safer for nerds, freaks and eccentrics of all sorts, the way we have all felt as LGBTQ people at some point in our lives (sometimes continuously!). The love for these outcasts and misfits shines through, underscoring the confidence they all show in owning differences and refusing to back down to social pressure to conform.

We chatted up the Brooklyn-based Jarvis about life, owning his own sexual health and his photography.

Tell us about the origins of  #SheHasHadIt?

#Shehashadit started the very day me and my best friend Josh moved to NYC. We were riding the J train to our very first  apartment in Bushwick, Brooklyn, when this magical Goddess of Hotmess & Weavidry storms into our subway cart, curses out an invisible person, makes up with that same invisible person, and then promptly fell in the deepest, most peaceful of sleeps! It was amazing, it was epic! I was obsessed!!!! I looked at my best friend and said, “GIRL! She has had it, and I want some too!” My friend insisted I take a picture to remember that moment forever, which I did. And then later I shared that photo and story to my Facebook page, in a little photo album I named “She Has Had It!” Haha, well, the album grew, and a friend of mine, begged me to put it on Instagram, so I did. Well, I guess the rest is history!!!!! YAAASSS KWEEN!!!!

Your captions are super creative, like a whole new street language. How did you develop it?

Well, I was raised super super religious, and extremely sheltered! Like, “I didn’t see a Disney movie until I was 21,” kinda sheltered. However, in college, far away from the grips of my family and my upbringing, I was allowed to fall madly in love with pop culture, old and new. It was like I gave myself a crash course in EVERYTHING I missed as a child, and then some! So combining my religious background, plus my love of pop culture, mixed with my true pride in everything LBGT, I came up with my own language!!!!!! It’s fun, it’s sassy, it’s quick, and it saved my life!

You are an advocate of owning your own sexual health and HIV testing. How does that apply to your own life?  What made you decide to work with OraQuick?

For the longest time, I lived in such fear about my own sexual health. Here I was, brave enough to go to a stranger’s house to hook up at 3 in the morning, yet absolutely petrified to go get tested, and truly know for myself what was going on in my own body. Yeah it sounds crazy to say that out loud, but at the time it was very much true. That is until one night, the topic of sexual health and HIV testing came up over drinks with a group of my closest friends. We all began to talk and share stories, and our fears, and frustrations about knowing, and not knowing. When it dawned on me, that knowing was far better than the fear and consequences of not knowing. That night I asked my best friend if he’d go with me to get tested for the first time, and of course he agreed, and what do you know, as we were walking to the next bar, there was this little bus outside on the street that said, FREE HIV TESTING. He grabbed my shaking hand, and led me to that bus, and I’m so grateful he did. It was quick, it was painless, and as a matter of fact, they used OraQuick to test me. I had my results in 20 minutes.

How should we navigate the challenge of talking about HIV status when it comes to dating and hooking up?

I say, you have to know yourself first, and all that goes with you, and then not only do you need to know yourself, you need to love yourself, all the flaws and awwes that make you the amazing and beautiful person you are today. I feel that taking the time to be honest and upfront with yourself about your status, and your sexual health, makes it a whole lot easier for you to talk to your partner about theirs. I also thinks it’s important to stay educated, updated and conversating on the topic of HIV and sexual health. Word of mouth and drinks with friends lead me to OraQuick, and it’s changed my life, maybe even saved it.

Check out Jarvis’ images and captions…