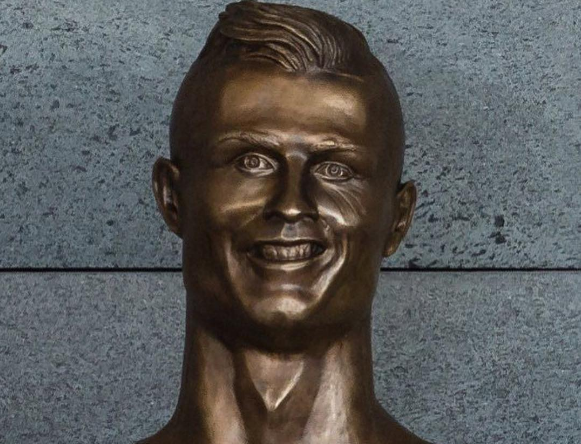 Audible gasps of horror could be heard from the crowd at yesterday’s unveiling of a new Cristiano Ronaldo statue in Madeira.

The bronze bust was revealed during a ceremony to name the Portuguese island’s airport in honor of its handsome, 32-year-old hometown hero. The problem was–well–you can see for yourselves.

Honestly, we’re not sure how you go from this:

Within minutes of the unveiling the internet was in a tizzy, and not in a good way. The international response has been pretty universal: Nobody thinks it looks like Cristiano, most people find the bust somewhat bothersome, and everyone feels sorry for him. Seriously, how could you not?

Cristiano Ronaldo will have nightmares about his statue. #ITMovie pic.twitter.com/3KN5Se29yh

I've done some digging but have managed to find a pic of the sculptor who did the Ronaldo statue. Here she is with an earlier client….. pic.twitter.com/mbQ82jW5Ko

Don't know what all the fuss is about #RonaldoBust pic.twitter.com/sm4EAKYg9w

Lots of people taking the piss out of that Ronaldo statue yesterday, looked fine to me… pic.twitter.com/BnC19ZNvoe

Damn! People are going in with the Ronaldo statue ? pic.twitter.com/7LTIynYn1w

Is that a statue of Ronaldo or Sloth? Lmao pic.twitter.com/x1vs0K3Qm5

You know that moment when you feel embarrassed for somebody else?
Tell those guys about it ?#RonaldoBust #RonaldoStatue pic.twitter.com/hkGvhh8HkT