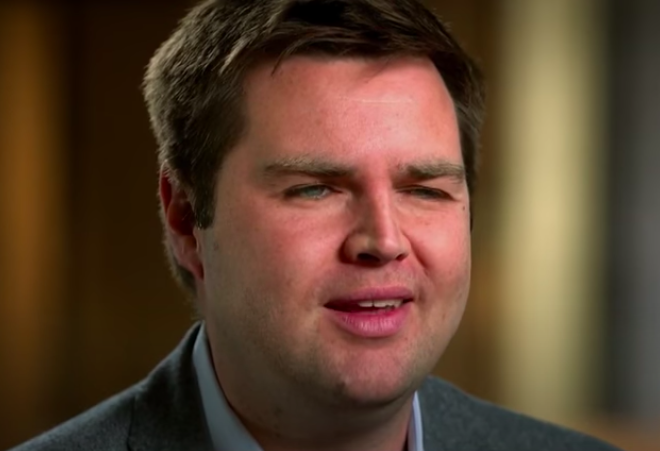 Bestselling-author-turned-GOP-clown J.D. Vance has once again made a complete ass of himself in yet another desperate attempt at appealing to Republican primary voters in Ohio.

Yesterday, the 37-year-old bigot shared a tweet by Rep. Alexandria Ocasio-Cortez about trans, two-spirit, and non-binary people, along with the caption: “I’m sorry but what the hell is two-spirit? Would love if progressives just stopped inventing words.”

I’m sorry but what the hell is two-spirit? Would love if progressives just stopped inventing words. https://t.co/QfxM0GRhQX

Had J.D. bothered to simply Google “two-spirit” rather than tweet his ignorance about it, he would have quickly learned that it’s not something progressives invented and is actually a term used in many Indigenous North American communities.

In fact, there’s a whole Wikipedia page about it, as well as a U.S. Department of Health and Human Services page, plus tons and tons of articles, explainers, and videos.

People on Twitter were quick to school Vance on “what the hell” two-spirit is. Here’s what they’ve been saying…

Might want to read up on Native American history, JD. https://t.co/JavznbPSxo

“Two-spirit” refers to a person who identifies as having both a masculine & a feminine spirit, and is used by some Indigenous people to describe their sexual, gender and/or spiritual identity.”

The term is a translation of the Anishinaabemowin term niizh manidoowag, two spirits.

You don’t even have one spirit so dont worry about it.

Bro it’s literally a term that’s been used by Indigenous peoples for hundreds of years???? Kinda funny you think AOC invents language. It would have come up instantly if you Googled it.

It’s a native term for those who are born in one sex but have more masculine or feminine traits. But more importantly who care? Don’t you have any policy to suggest?

Are you capable of empathy? Are you interested in learning from someone else’s experience and perspective?

I’m confused too but my kids are explaining it to me. Try having an open mind.

Two-spirit is you now vs. you when you wrote your book.

Says the guy who calls his grandmother “meemaw.”

Last month, Vance, whose U.S. Senate campaign is being largely funded by gay billionaire Peter Thiel, posted a racist video to Twitter railing against Afghan refugees. The video left many on social media rattled after they noticed his erect nipples protruding through his t-shirt.

Subscribe to Queerty for a daily dose of #politics #j.d.vance stories and more