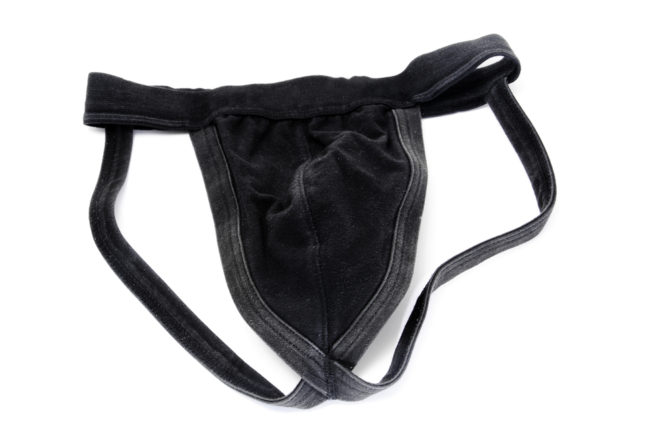 Today we learned jockstraps have some sort of function outside the realm of adult entertainment, with Wikipedia teaching us they’re intended as “an undergarment for supporting the male genitalia during cycling, contact sports or other vigorous physical activity.”

Related: PHOTOS: Bury Your Face In These Musky Jockstraps

We’ve been researching the topic all morning since stumbling across a hapless Redditor who asked the community a burning question:

I have one blue banded, white nylon/polyester/cotton jockstrap with large (2)Xist brand-name on waist. If a random person saw it, would they think it’s for a gay man?

Seems you need to ask straight people if it would tip them off. If I saw a guy with it I would assume he was into dudes, but I’ve known the culture.

But Endelphia is not so sure:

a jockstrap in and of itself isn’t gay, but any brand that’s marketed toward gay men is. but just because a guy is wearing one doesn’t mean he’s bi/gay

Incisive. As is this nugget of wisdom from rainbowgeoff:

Jockstraps are treated like lingerie in the gay world, but straight men just look at them as workout clothes.

Then someone named flyboy_za weighs in, and it turns out like this:

Articles I’ve read seem to suggest that it’s only older guys who still [wear jockstraps for exercise]; younger guys are all boxerbriefs or compression shorts for workouts.

I reckon 5 years from now, any guy under 50 in a jock will definitely be a gay guy.

torxcil thinks it’s not jockstraps per se that are gay, but jockstraps that are patterned, colorful, or have thoughtful design details:

If you’re wearing something like that, then yes everyone is going to be 110% sure you are gay-gay.

A regular jock in a locker room is more ambiguous

SquatsMadeMeGay thinks colorful jockstraps reveal much, much more than merely being gay:

They are not only gay but scream “I am a bottom!”

rodenstock01 doesn’t know what to think and just wants some answers.

This all confuses me. When I was a kid you could buy a jock at Sears or any department store. But now I never see them except online or in gay apparel stores. As a teenager my mother made my wear one to gym class or playing sports I suppose to keep my jewels from popping out unexpectedly. But I didn’t want to wear one because no one else did. When I told her that, she said then those boys are pigs.

So where do you stand on jockstraps? Are they inherently gay, or is the situation far more complicated than that?