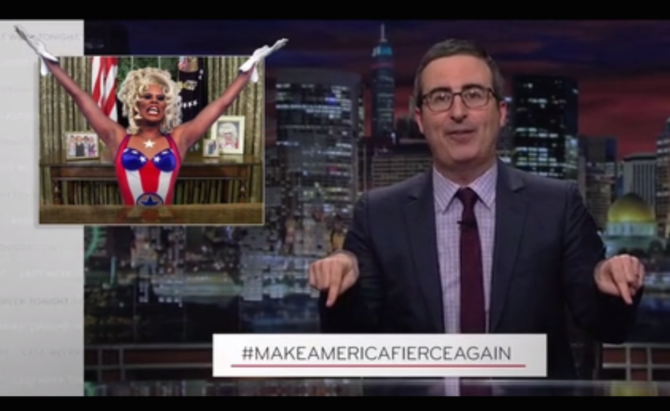 It is with an uncomfortable sense of relief that John Oliver is back on there air — we’re going to need him now more than ever to hold his ever-so-articulate mirror up to reality.

So it’s also appropriate that he would take a moment out of the season four premiere of Last Week Tonight to make a political prediction we can really get behind.

“The notion that our leaders should be able to pass on mistruths with impunity should be alarming to absolutely everybody, regardless of politics,” he said. “Republicans should badly want our sense of objective reality to remain intact, just in case the Democrats ever find their own appealing reality star to win back the White House. RuPaul, for instance. Make America fierce again. #MakeAmericaFierceAgain.”

OK, so maybe he was using the example to make a fair point about why entertainers aren’t the best candidates to lead a country, but at this point Ru would surely be an improvement by any measure.

Twitter seemed to agree, taking no time to run with the hashtag:

Seriously Rupaul can you please run in 2020? #makeamericafierceagain

I have really missed John Oliver. Let us all beg @RuPaul to save us from the orange faced man! #makeamericafierceagain pic.twitter.com/cAraeWYp0l

It’s good to have you back, John.

off the market
8 comments