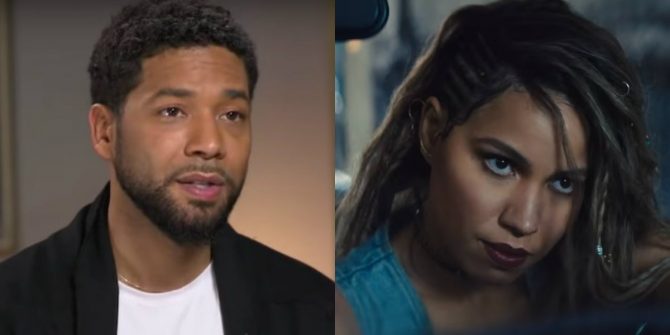 In a recent interview, actress Jurnee Smollett, sister of actor Jussie Smollett, has lashed out at allegations that her brother faked a hate crime.

Jussie Smollett landed in the headlines in early 2019 when he reported being the victim of a hate crime. According to Smollett, a group of men beat him, tied a noose around his neck and doused him with bleach while yelling racial and homophobic slurs. Police later arrested brothers Abimbola and Olabinjo Osundairo, but declined to charge them with the crime. Instead, law enforcement claimed to have uncovered evidence that Smollett paid the brothers to stage the attack in hopes of getting a salary boost on the television series Empire. Smollett was fired from the show and indicted for making false reports to police, though those charges were later dropped. Subsequently, a special prosecutor charged Smollett with six accounts of disorderly conduct. Smollett pled innocent to the charges, and has maintained his innocence throughout.

Now Jurnee Smollett has opened up to The Hollywood Reporter about how the ordeal has affected her family, and where they stand on Jussie’s innocence.

“It’s been f*cking painful,” Smollett says, “one of the most painful things my family’s ever experienced — to love someone as much as we love my brother, and to watch someone who you love that much go through something like this, that is so public, has been devastating. I was already in a very dark space for a number of reasons, and I’ve tried to not let it make me pessimistic. But everyone who knows me knows that I love my brother and I believe my brother.”

“We are blessed to have a community of people who know him,” she adds, “and know that he wouldn’t do this.”

Jurnee also offered a brief glimpse into Jussie Smollett’s life following his status as a Hollywood pariah. Though she didn’t go into much detail, she claims Jussie is doing well despite the drama.