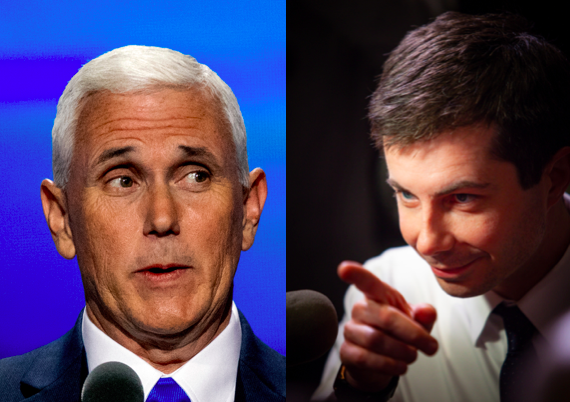 Oh, man. Mike Pence is not gonna like this.

As Kamala Harris preps for the vice presidential debate on October 7 in Salt Lake City, which is expected to draw huge audiences, her team has tapped none other than Pete Buttigieg to play Pence in mock the debate.

Buttigieg was selected to play the role of Pence because of his familiarity with the vice president, who was governor of Indiana when Buttigieg was mayor of South Bend. Buttigieg often talked about Pence on the campaign trail, using him as a foil especially on religion.

… Buttigieg has become a top surrogate for the Biden campaign. Buttigieg received a speaking slot at the Democratic National Convention, was added to the transition team’s advisory board and is expected to join the administration if Biden wins.

In many ways, it’s the perfect casting.

Pence and Buttigieg have a lot in common. They’re both from Indiana. They were both raised Catholic. (Pence was an alter boy; Buttigieg attended a Catholic high school.) They’re both married to teachers. We could go on and on.

They also both dislike one another immensely.

During the Democratic primaries, Pence rarely commented on any of the candidates… except for Buttigieg, who he seemed to have an obsession with.

Karen Pence, too, disparaged Buttigieg during the primaries. In a radio interview, she accused him of attacking her husband’s religious beliefs when he called him out for using Christianity to justify his homophobia.

Last year, Buttigieg told Stephen Colbert: “[Mike Pence] seems to think that the universe was created a few thousand years ago and that people like me get up in the morning and decide to be gay. … What he doesn’t realize is that his quarrel is with my creator. My marriage has moved me closer to God and I wish he respected that.”

Harris has expressed some trepidation going into the debate.

“[Mike Pence] is a good debater,” she said at a fundraiser earlier this week. “So, I’m so concerned, like I can only disappoint.”

We think she’s downplaying expectations. Because if there’s one thing Kamala Harris knows how to do, it’s completely eviscerate an opponent on the debate stage. Just as Joe Biden.