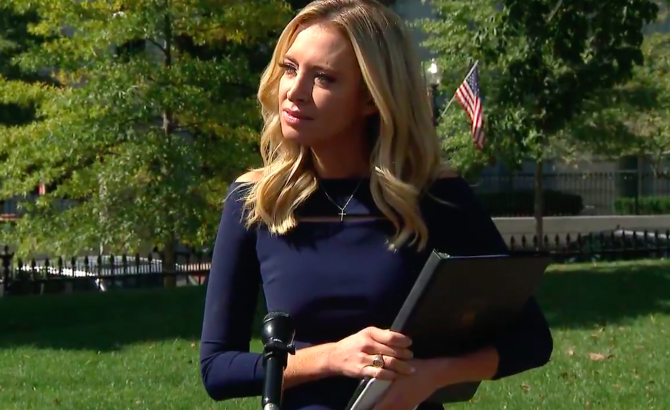 White House press secretary Kayleigh McEnany just held what may have been her worst press conference to date, during which she tried to assure reporters that there’s no need for anyone to be worried about Donald Trump testing positive for coronavirus.

McEnany insisted that Trump is doing juuust fine. Great, actually! Sure, he’s feeling a little down, but he’s working harder than ever. In fact, White House aides are having to tell him to “slow down, boss!” because he just keeps powering through because, you know, stamina!

When asked what “mild symptoms” Trump is exhibiting, McEnany wouldn’t answer the question, simply saying, “I’m not going to get into the president’s symptoms exactly.”

JUST IN: Press Sec. Kayleigh McEnany gives reporters an update on President Trump: "He's been hard at work. We're having to slow him down a little bit." pic.twitter.com/q7bcL7AK1R

And when asked why Trump attended a fundraiser at his New Jersey golf club even after he knew he had been exposed to the virus and was showing early symptoms of COVID-19, McEnany inspired even more confidence by spewing several verifiable lies.

First, she said the fundraiser was held outdoors. (It wasn’t.) Then she said it had been deemed safe for Trump to travel. But when asked who made that assessment, she refused to answer and instead quite literally turned around and hurried away.

—@PaulaReidCBS presses @PressSec on who assessed it was OK for Trump to have attended fundraiser after WH learned of possible exposure. McEnany says White House operations made the assessment in consultation with others, then ends briefing. pic.twitter.com/IxcPVq034U

Since announcing he tested positive for coronavirus, Trump has been radio silent on Twitter. He hasn’t made a peep in 13 hours, which may be a record for him.

In a statement, Vice President Joe Biden, who has tested negative for coronavirus, wished Trump and his wife a “swift recovery” from the virus that has, so far, killed over 208,000 Americans.

“Jill and I send our thoughts to President Trump and First Lady Melania Trump for a swift recovery,” Biden said. “We will continue to pray for the health and safety of the president and his family.”