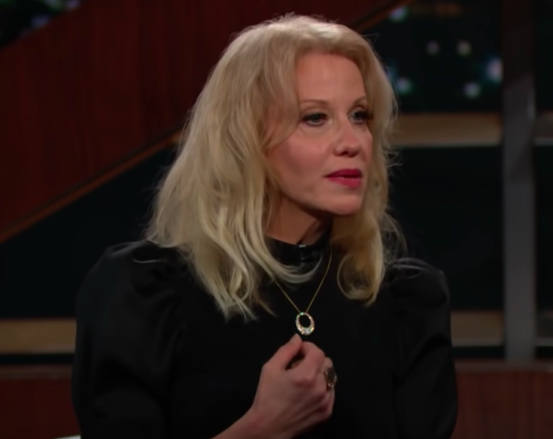 The ongoing drama between Kellyanne Conway and her teenage daughter, Claudia, has taken an even darker turn, with the ex-counselor to disgraced former president being accused of tweeting a topless photo of the minor.

The illicit photo briefly appeared on Kellyanne’s Twitter page yesterday evening. It was only up for a short while before being yanked down.

According to screen captures posted by users on social media, Kellyanne Conway’s account (@KellyannePolls) shared an image of her topless teenage daughter using Twitter’s recently launched Fleets feature, which deletes posts after a 24-hour period (similar to Instagram and Snapchat’s stories). The Fleet was removed but not before Twitter users documented it.

In a since-deleted TikTok video posted later in the night, Claudia confirmed that the picture was authentic, though she wasn’t exactly sure how or why her mother had it.

“Apparently that’s real and here’s what I guess happened,” she said. “The picture’s from months ago and I’m assuming that when my mom took my phone — any time she’s taken it because she takes it all the time — she took a picture of that, so that was on her phone.

“And I guess she accidentally posted it, or somebody hacked her,” Claudia continued. “But nobody would ever have any photo like that ever. So, Kellyanne, you’re going to f*cking jail.”

Claudia Conway after finding out from her TikTok followers that this photo was circulating on Twitter, part one: pic.twitter.com/2UqaySrxT7

Claudia Conway after finding out from her TikTok followers that this photo was circulating on Twitter, part two: pic.twitter.com/2E7sheSNed

The illicit photo share comes one week after the police showed up at Kellyanne’s front door amid allegations of child abuse.

Last week, Claudia posted a series of disturbing TikTok videos accusing her mother of physical and verbal abuse. In one of the videos, Kellyanne calls her daughter an “ungrateful bitch” and threatens, “You’re never gonna record another f*cking thing in your life!”

A rep for Twitter says the company is investigating the matter. As for Kellyanne, she hasn’t issued any comment.

Here’s what folx are saying about the whole thing…

If you’re just waking up:

Overnight, Kellyanne Conway posted a naked photo of her underage daughter, in an act of revenge.

I am calling for Kellyanne to be arrested immediately and Claudia Conway to be emancipated.

If you see the photo of #claudiaconway (uncensored) REPORT IT IMMEDIATELY. SHE IS A MINOR and even if she wasn’t, it’d still be wrong. #justiceforclaudiaconway

Kellyanne Conway must face charges for abusing her daughter and posting topless photos her her on the internet. She is killing her kid #claudiaconway #kellyanneconway #justiceforclaudia

what is joe biden’s plan for putting kellyanne conway in jail bc im tired of seeing claudia being abused on my tl pic.twitter.com/BioyVy5pZ0

I assume everyone who tried to #BoycottNetflix over the #cuties doc is going to be more enraged that #kellyanneconway shared nude photos of her own underage daughter #claudiaconway. No? Because it was fake outrage? Got it.

The Child Protection Agency should be knocking on the fucking door of Kellyanne Conway. #claudiaconway deserves better

How the hell is Kellyanne Conway not in jail yet for the repeated abuse of her daughter Claudia?

And why is her FATHER allowing it to happen? He’s as much to blame.