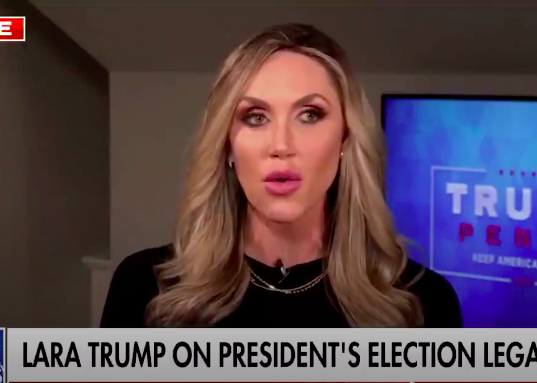 In the real world, Joe Biden won the 2020 presidential election and will be sworn into office at noon on January 20, 2021. In Donald Trump‘s world, the jury is still out.

Trump’s daughter-in-law, Lara, went on Fox News yesterday to claim that her father-in-law will, indeed, serve as president for four more years. She’s absolutely sure of it!

Speaking to Martha MacCallum, Lara said the election, which happened almost a month ago now, is “far from over.”

“I still think that the president will get four more years in office,” she blabbed. “I think it will be the next four years because this thing is far from over.”

That’s when MacCallum interrupted to say that, actually, Biden has been certified as the winner in numerous states, including all of the battleground ones, so, no, Trump will not be president for the next four years, and even Geraldo Rivera–Geraldo Rivera!–agrees.

“Well, those certifications are just procedural steps,” Lara replied. “And the reality is that the electoral college does not vote in their states until December 14th. Congress doesn’t actually certify anything until the beginning of January, so we’ve got plenty of time.”

Last week, Lara went on Fox & Friends to make similar claims, saying that a lot of people “do not feel” Biden won the election, sooooo he shouldn’t be president, right? Right?!

“Last time I checked the people were still in charge of the United States of America,” she said, “and there are about 74 million people out there who do not feel like the result of this election that’s been presented is accurate.”

Too bad there are about 80 million people out there who do feel the result of this election is accurate.

Not long after her embarrassing appearance on Fox News last night, Lara was dragged on Twitter for her delusional remarks…

The entire family is delusional. Lara Trump appears on national TV and insists Trump “will get four more years”. Anchor immediately checks her, saying “that ship has sailed”. 😂 pic.twitter.com/1zycAbafk2

This is the person that married Eric. Need I say more?

She doesn’t believe it. Lara knows how Mary Trump‘s mom was treated & is trying to make sure she & her kids are not cut out of any grift or inheritance.

He will definitely ‘SERVE’ in prison.

Are there any reasonably inteligent Trumps?

You know it’s bad when Geraldo is the voice of reason.

She’s strengthening her place in the will. Big inheritance ahead!!

She really is an idiot!

Related: Lara Trump says lots of people “do not feel” Biden won, so he shouldn’t get to be the winner