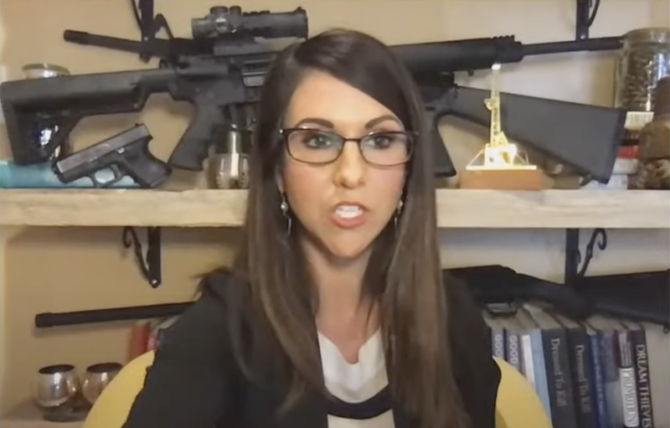 Lauren Boebert reminded everyone that she’s a homophobic POS this week when she attacked the U.S. Naval Academy for tweeting its support of LGBTQ service members.

It all started when the academy tweeted a Pride message that read, “During #PrideMonth, the U.S. Naval Academy celebrates the diversity of our midshipmen and our workforce, and promotes the dignity, equal rights, and self-affirmation of the LGBTQ+ community.”

During #PrideMonth, the U.S. Naval Academy celebrates the diversity of our midshipmen and our workforce, and promotes the dignity, equal rights, and self-affirmation of the LGBTQ+ community.#PrideInAllWhoServe #NavyPride pic.twitter.com/ncgaWUlaq4

Nobody was more offended by the message than Boebert, who tweeted a screenshot of the image beside a screenshot of a piece of WW2 Soviet propaganda, along with the caption: “I’m sure Russia’s running scared with our new woke PR campaign.”

But Boebert’s tweet, while vile, is not the least bit surprising.

The “family values” congresswoman has frequently flaunted her hatred for LGBTQ people. In March, she said she opposed the Equality Act because it promoted “supremacy of gays, lesbians, and transvestites.” And last month, she mocked nonbinary people when she announced her pronoun is “patriot.”

My pronoun is “Patriot”.

And just last week, she accused liberals of legalizing the spread of HIV for working to end homophobic HIV exposure laws.

Seriously, it must be exhausting to be so hateful.

And now, the responses to the congresswoman’s pro-Russian/antigay tweet…

Keep on rooting for the enemy #FakePatriotParty

Valourizing Soviet propaganda to own the gays

You want to know some of the most badass warriors of all time? Google “Sacred Band of Thebes.” 150 male couples.

Our Congressional Representative here is wishing we were more like Russia. What??

Russia liked it better when the former guy brought lipgloss and KY. pic.twitter.com/cluBQbXOGx

I feel bad for your children since they now know that their mother will reject them for being gay.

This is beyond homophobic. You should be censured, immediately.

Instead of #Pride , @RepBoebert would rather see a return to Paragraph 175 https://t.co/k1OWi4bAoS

You’re the reason they have to print “do not eat” on packets of Tide Pods.