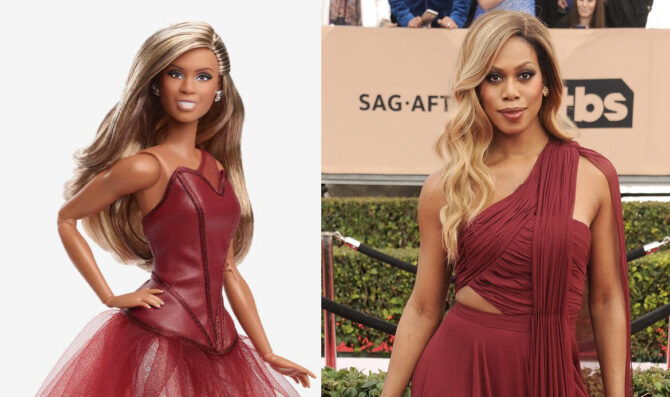 Laverne Cox is in her plastic fantastic fantasy this week after Mattel released an official Barbie doll in her likeness as part of their Tribute Collection. Featuring a red leather bodice that flows into a light tulle gown all covering a silver bodysuit, the doll is the first of its kind to be modeled after a trans woman. It’s giving “Barbie Tingz”, it’s giving Life Size (2000), it’s giving “The dolls are the dolls” but literally.

Cox revealed in a recent interview that the doll’s release is a full-circle moment for her personally, as she wasn’t allowed to play with Barbies as a child because of her assigned sex.

“I begged my mother for a Barbie doll and she said no because I was assigned male at birth,” the star stated. “And when I was in my 30s, I was in therapy and telling my therapist that I was denied the opportunity to play with Barbie dolls. And my therapist said, ‘It’s never too late to have a happy childhood, and what you should do for your inner child is go out and buy yourself a Barbie doll.’ ”

Related: Laverne Cox reveals she has a new man in her life and is in love

She went on to detail that after talking to her mother about that discussion, her mother started to send her Barbie dolls for her birthday and Christmas. Now, Cox will have her very own mark on the Barbie legacy forever.

Of the experience, Cox stated, “It’s a process of reclaiming my inner child, healing her, giving her what she didn’t have the first go-round. Giving those things to her now.” With this doll, she may give that same healing to other little girls like her around the world.

In honor of Laverne Cox’ induction into the Barbie universe, here’s a list of five more dolls we think should be added to the roster…

Just on the brink of 15 years old, Zaya Wade is still a kid herself. Trans girls seeing themselves represented in their toys is valuable as it is, but of someone in their same generation? Imagine the impact. After the years of unwelcome scrutiny Zaya has faced as the daughter of stars Gabrielle Union and Dwayne Wade, she may as well be allowed to cash in on the attention.

She’s done Vogue. She’s done a music video with Miley. She’s got work with Jeremy Scott, Marc Jacobs, and more under her belt. She’s got the look, the emotional fortitude to back it up, and a unique story that is dearly underrepresented in a world like that of Barbie.

The Euphoria cast is taking off in every which direction, and Hunter Schafer is one of the show’s crowning jewels. (Get it? Jules? We’ll be here all week!) Honestly, with her look as is, she could be in the upcoming Barbie movie and we don’t think too many folks would bat an eye.

Shay Neary is the first trans plus-size model to be featured in a major fashion campaign, and that’s not the only first we see in this beauty’s future. Additionally, Barbie’s history of unrealistic body image has been a hot-button topic for the company in the past, and a Shay Neary doll would make for a gorgeous new chapter for the brand.

The star, the icon, the poster child of Pose, Miss Michaela Jaé would be a no-brainer for another entry into Barbie’s lineup. The name recognition is there, she’s got a killer runway walk, and if they ever want a new theme song, she can belt like few others.

May Laverne Cox’s new arrival to the Barbie scene be far from the last!