Why She Matters: In 2017, Waithe became the first black woman to win an Emmy for Outstanding Writing for a Comedy Series for Master of None. 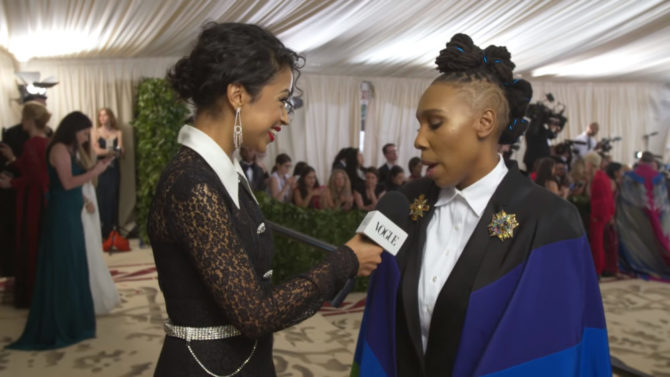 Why We’re Proud: Lena Waithe has arrived. Besides her historic Emmy win, Ms. Waithe appeared in Ready Player One, winning critical notice for her performance as the gamer/mechanic Helen. She also launched her own semiautobiographical series The Chi about life on the south side of Chicago. Recently, Time named Waithe as one of the 100 most influential people. In the midst of all of it, Waithe has spoken frankly about her experiences as an African-American lesbian, without the understandable fear actors face when living an authentic life under the public eye.

Most recently, Waithe made a splash at the Met Gala, showing up in an elaborate tuxedo with a Pride Flag cape, a gesture made all the more important given this year’s Gala theme: “Heavenly Bodies: Fashion and the Catholic Imagination.” She sent a clear message to the church hierarchy, and more importantly, to the LGBTQ people in the pews, that being queer is nothing short of fabulous and powerful.

Her fashion statement reiterates a statement made during her Emmy speech:

“Last but certainly not least, my LGBTQIA family. I see each and every one of you. The things that make us different, those are our superpowers. Every day when you walk out the door and put on your imaginary cape and go out there and conquer the world because the world would not be as beautiful as it is if we weren’t in it.”

In essence, Lena Waithe has reminded us all to be proud of ourselves. We can’t help but feel proud of her this pride season.