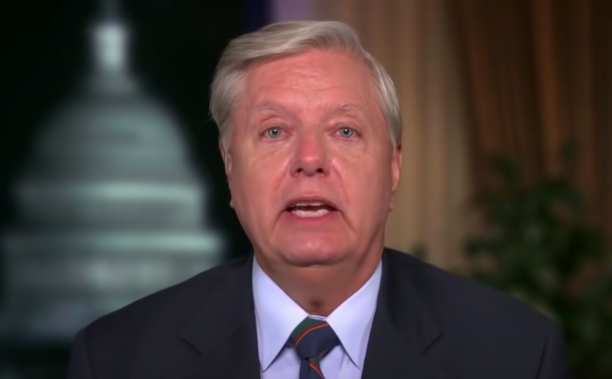 Perhaps nobody was more terrified when domestic terrorists descended upon the U.S. Capitol last week than Senator Lindsey Graham of South Carolina.

Sen. Sherrod Brown says Graham “screamed” during the insurrection, accusing a Capitol Police officer of not doing “enough” to protect him as the building was being stormed by the MAGA militia.

Speaking to Ari Melber on MSNBC yesterday, Brown described what it was like being inside the Capitol last Wednesday.

“I heard when the 75 senators were confined in a room with about 75 staff people, Lindsey Graham with his mask off started screaming at one of the officers,” he recalled.

“I think it was one of the captains, saying, ‘How come you didn’t protect us? It’s doing your job!'”

Later, Brown added, “He was screaming at an officer. He had his mask off screaming at this officer from 5 feet away–I was maybe 10 feet on the other side–that the officer, the police, didn’t do enough to protect us.”

WATCH: @SenSherrodBrown reports publicly for the first time that during the attack on the Capitol he saw a maskless Sen. Graham scream at a Capitol police officer for not "doing enough" to protect the Senators pic.twitter.com/LKkfIkmfiH

A spokesperson from Graham’s office tells The Hill that he had heard about the Senator from South Carolina “letting the sergeant-at-arms know his thoughts,” but he didn’t elaborate on reports of Graham “screaming.”

Here’s how people on Twitter are responding to the story…

I would have expected @LindseyGrahamSC to be having a full blown case of the vapors on the fainting couch. Good for him for standing up and yelling at the people that were trying to protect him from the monster he created.

Graham would be the screamer

Guess Lindsey found out the hard way that a mob can’t be controlled. Not very bright that he didn’t know that.

“Officer! Do you not recognize me? I’m Lindsay Graham! Do you hear me sir? The beloved, and cherished, friend of the President! LINDSAY GRAHAM!
Oh my God! Protect ME!!”

But these protestors just “needed to be heard”. They had feelings.

Isn’t that what Graham & the other enablers in the @GOP are telling us?