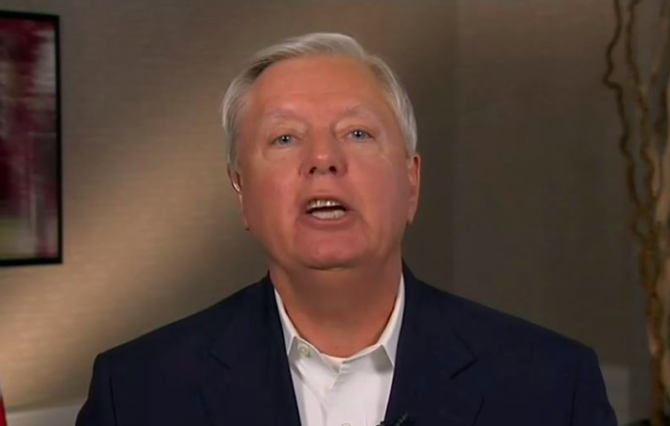 Senator Lindsey Graham has reached new heights–or sunken to new depths, depending on how you look at it–in his adulation for Donald Trump.

Speaking to Sean Hannity last night, Graham was asked about the Republican party turning on Liz Cheney for her continued criticisms of the ex-president.

Cheney became persona non grata among her Republican cohorts earlier this week when she said the 2020 election wasn’t stolen from Donald Trump and then urged people to stop pushing “THE BIG LIE.”

The 2020 presidential election was not stolen. Anyone who claims it was is spreading THE BIG LIE, turning their back on the rule of law, and poisoning our democratic system.

The tweet was followed by an op-ed published in The Washington Post in which she urged the party to move way from “the Trump cult of personality.”

Speaking to Hannity yesterday, Graham claimed the party is gaining traction among minorities thanks to Trump’s “economic populism” and “America First agenda.”

“If you don’t get that, you’re making the biggest mistake in the history of the Republican Party,” he said.

The strange irony, of course, is that Graham is saying the GOP “can’t grow” without Trump when Trump is the reason the GOP lost the White House, the Senate, and the House of Representatives and why voters are leaving the party in droves.

Lindsey Graham is living in a condo deep in Trump’s ass.#KidVicious?

And now, the reactions…

The former President’s lap dog, Lindsey Graham has been found and reunited with his owner.

I’m old enough to remember when Lindsey Graham illegally pressured Georgia election officials to throw away a lot of votes. How is he not in prison yet?

You can always count on Lindsey Graham (the new Lindsey) to do and say the wrong thing.

— Republicans against Trumpism (@RpsAgainstTrump) May 7, 2021

Breaking: Lindsey Graham just announced that the Republican Party has no future.

Question of the Day is Lindsey Graham a Trumplican or not? ?????

Im old enough to remember Lindsey Graham warned us that if cheeto was the nominee the republican party would be destroyed and they would deserve it. The GOP is dead and they deserve it.

Thank you, Lindsey Graham, for reminding us you’re truly the worst Republican Senator.

Lindsey Graham is a national embarrassment.

Lindsey Graham tried interfering with our election and he needs to answer for his crimes.