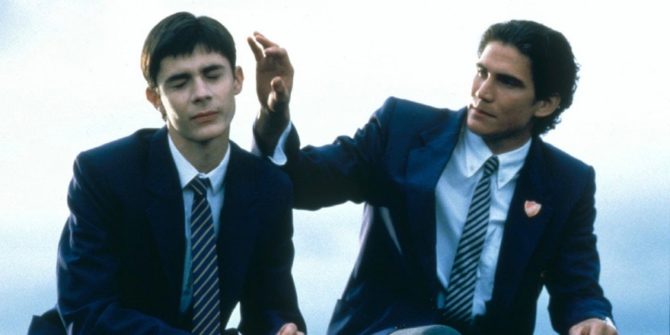 The Fantasy: Get Real

Get Real follows Steven (Ben Silverstone), a handsome, lonesome 16-year-old living in blue-collar Britain. Steven realizes he’s gay, and begins to seek out other men the only way he knows how: by cruising a public toilet. One day he has an encounter with John (Brad Gorton), the popular high school jock. John denies he’s gay, though he soon changes his tune, and expresses his feelings for Steven. The two begin a covert relationship, even as rumors begin to fly about Steven’s sexuality.

We’ll not reveal more than that here, other than to say Get Real has some moving moments (including an excruciating climax), and represents an important historical artifact in terms of queer cinema history. The movie realizes a fantasy of the time: that young LGBTQ kids could undergo sexual awakening, come out and find love at school and win the heart of the popular classmate a-la countless other teen comedies. For a generation of people that came out in their 20s or later, seeing the fantasy come to life must have felt empowering and comforting.

Today, Get Real makes an episode of Glee look like a documentary, musical numbers and all. That doesn’t mean the movie doesn’t have merit. Silverstone gives a winning performance in the lead, and Charlotte Brittain, as Steven’s straight bestie Linda, has some hilarious moments as she tries to protect Steven from bullies. We recommend giving Get Real a watch, if for no other reason but to see how far movies–and the community–have come.