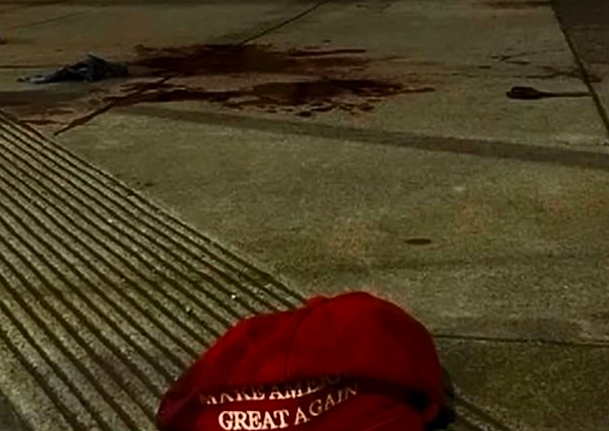 A man wearing a red “Make America Great Again” hat sliced open another man’s hand after getting into an argument with him outside a roller-skating rink in San Francisco.

The attack happened last Friday outside the Church of 8 Wheels at the former Sacred Heart Catholic Church. According to police, the men got into a heated altercation just outside of the venue.

Things escalated as the man in the MAGA hat began shouting homophobic slurs at the victim. When the victim tried to grab the hat, the attacker pulled out a sword and slashed open his hand.

“We know the suspect was wearing the hat,” SFPD spokesperson Officer Robert Rueca said Sunday. “During the incident the hat came off of the suspect. The suspect and the weapon remain outstanding.”

The red MAGA hat, which has become a universally known accessory for supporters of President Trump, was left on the sidewalk near a pool of blood.

Police said the victim had tried to grab the hat when the wearer pulled out his sword and slashed the victim in the hand.

Investigators have spoken with eyewitnesses and are looking for video surveillance footage.

24-year-old Scott Sweeney witnessed the attack from across the street.

“In my mind I didn’t think it was a real sword until we came out later and police were on the scene and there was blood and the hat on ground,” he said.

Meanwhile, David Miles, who manages the roller rink, said he didn’t witness the actual attack but he did rush out to help the victim, who he says was “gushing blood.”

“I gotta do something about this, gotta up the security,” he said. “Even though he didn’t come into the church, he could have. This could have been worse.”

“This is the last thing you think is going to happen. I’m very, very, very concerned.”

The victim was taken to a local hospital where we was treated for non-life threatening injuries.