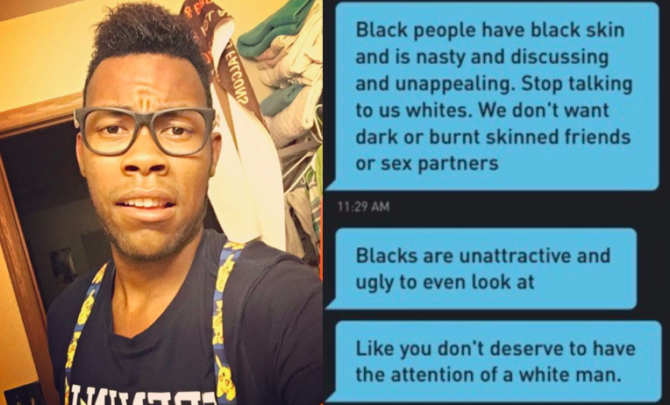 A young man has shared the disgusting racist messages he received from a guy he met at Pride.

Twitter user @TEEZBabyCakes had a great time at Toledo Pride last weekend. He spent the afternoon chatting with people, being social, and making new friends.

But the next day, he received a message on Grindr. It read:

Please stop talking to my boyfriend. You tried to talk to me and my boyfriend at pride last night by the booth? We’re boyfriends we don’t want to hookup with you.

Maybe I was being social cause it’s Pride? You know that event where actually try to make more gay friends? Side note: Dick cruising gets old and takes a lot of energy.

And that’s when things took a truly vile turn. The man’s replied:

Oh, but it gets worse. The man continued:

Blacks are too dark and have ruined beauty for us queers. Take ur fried chicken and fatty foods elsewhere away from us. You n*gers…you can’t even get a nice job. You all are so poor. Can’t even afford a new car.

But if you thought that was bad. Just wait until you read what he said next:

Black people have black skin and is nasty and discussing and unappealing. Stop talking to us whites. We don’t want dark or burnt skinned friends or sex partners… Blacks are unattractive and ugly to even look at… Like you don’t deserve to have the attention of a white man…. I don’t want my clean big d*ck in some dark boy p*ssy or black skinned mouth. I would feel ashamed and disgusted.

@TEEZBabyCakes shared the messages on social media. As horrible as they were, he says he was unfazed by the whole thing.

Tried being cordial and friendly with a white gay couple at Toledo pride yesterday. These are the messages I get the day after. ? pic.twitter.com/AhFBByPVuy

Sadly, this sort of thing is not uncommon. A survey conducted by the Gay Men’s Sexual Health Charity in the U.K. earlier this year found that more than seven in 10 gay Black men reported experiencing racism in the LGBTQ community.