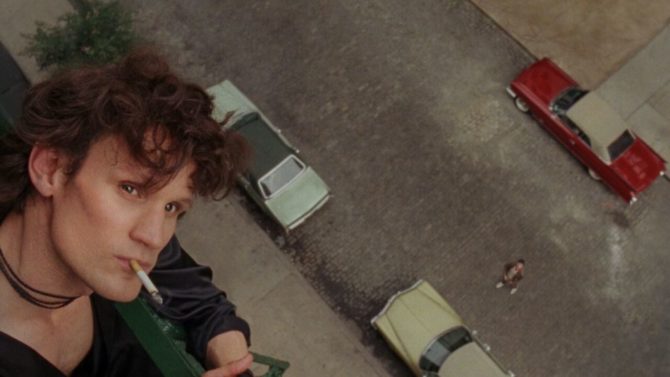 The mere mention of the name Mapplethorpe certainly conjures up some very vivid images: leather, penises, lilies, all photographed in stark black and white.

Director Ondi Timoner’s biopic of Robert Mapplethorpe, which had its world premiere in New York this week at the Tribeca Film Festival, captures the creation of many of those images, with The Crown’s Matt Smith behind the lens as the celebrated gay photographer. The film traces Mapplethorpe’s trajectory from his days as a penniless artist living with girlfriend Patti Smith in the iconic Chelsea Hotel to the pinnacle of his career shooting both famous faces and raunchy tableaux.

No stranger to queer roles—or, for that matter, bearing all in front of the camera—Smith plays Mapplethorpe as the consummate enfant terrible with an insatiable thirst for beauty and fame.

The day after Mapplethorpe’s premiere party at The Eagle, Queerty joined Smith at the Roxy Hotel in Manhattan to talk about the film, getting naked on camera, and just how much he likes photos of penises.

How much did you know about Robert Mapplethorpe before taking on this role?
You know, not a great deal. Not in the way that you do if you’re a New Yorker. The consciousness of him in Britain is not quite the same.

Oh really? I hadn’t considered that.
I don’t think so, no. I think he’s sort of intrinsically in the fabric of New York. So that was a really wonderful journey for me. You’re aware of his photographs subliminally I think. I got to spend a bit of time with those and then learn a bit about him and his appetite for art and New York and life and love and all those things. He’s a fascinating man.

So what attracted you to him as a character, not being particularly familiar with him?
All those things, really. His appetite and his singularity. The fact that he was…Look, he was quite selfish, as a lot of great artists are. There was something in that that I felt was very interesting. And his relationship to sex and drugs and partying, and friendship and love. All of those things are so complex and interesting.

One of the things that struck me in the early parts of the film, and in Patti Smith’s book about her life with Mapplethorpe, was their poverty. They were poor in a way that I think people who consider themselves “starving artists” today couldn’t even fathom. They did so much with so little.
That’s so true. I think that’s a very interesting observation, and actually, I wish the film could have spent a bit more time on that, and that relationship to be honest. Yeah, they were piss poor. And in a way that wasn’t cool. They were just poor. They didn’t have enough money to eat. What money they did have, he spent on art. And he was prolific. He made a lot and kept making things. 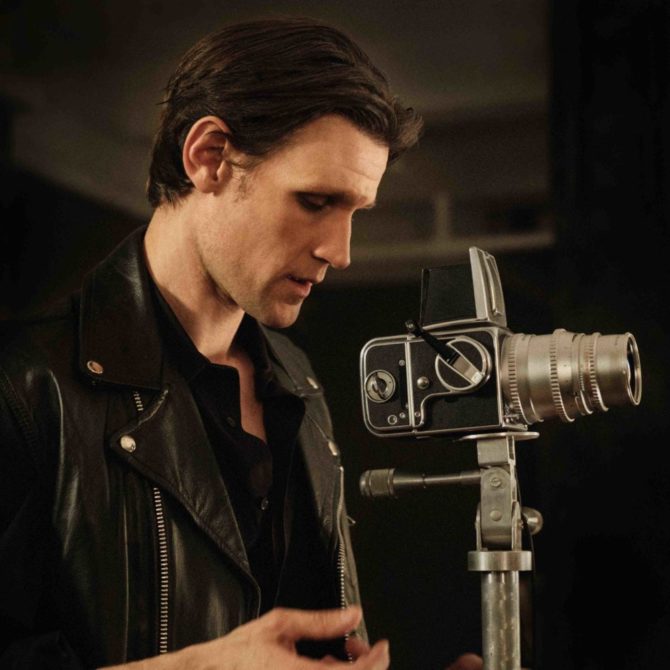 There are so many scenes in the film in which you actually are shown recreating Mapplethorpe’s work—especially early on, you’re doing some of the same collage work he did in the 60s. Tell me about the experience of doing that.
Those are the things that are quite interesting as an actor, when you get to practice the behavior or lifestyle or vocation of the person you’re playing. But look, truth be told, a lot of those things were already constructed. But what was wonderful was seeing the images through the Hasselblad [camera] and Polaroids and stuff like that, and actually getting to think visually, like a photographer. That was really cool. And…Who knew that pictures of cocks were so compelling? But somehow they are.

I think nudity and art have a closer relationship.

Speaking of which… This is a film about an artist who makes erotic art, whose work featured a lot of nudity. And you as a performer are naked a lot in this movie. I’m curious about your relationship to having your body displayed in the way that it is in this film and has been in other films.
I don’t know really. I try not to think about it too much. You just do, generally, what the scene requires. And the rest is sort of history. If the scene requires nakedness and the character requires nakedness, then it’s a choice, isn’t it? I sort of try not to over-think it at the moment. I just do it and hope it doesn’t look like shit.

Your body changes over the course of the film as he becomes ill.
It’s such a tricky thing when you’re playing someone. You’re never gonna be them. You’re never gonna absolutely, completely be that person. But you do everything in your power to sort of capture an essence, and I suppose that’s what I was trying to do. He was skinnier than I am—I’m getting a bit skinnier, really. Which is appalling! [Laughs]

The film doesn’t shy away from the exploitative nature of some of his work. [Ed. Note: Critics have noted that Mapplethorpe’s images of African American models are particularly problematic.] I’m thinking of his artistic and personal relationship with Milton Moore (McKinley Belcher III). They’re beautiful images, but…
They’re his images.

Exactly. When you learn about the relationship behind them…
That’s what’s interesting about Robert. It sort of is a collaboration, but it’s not. And I think a lot of great directors are like that. They’ll put you through… It’s only hearsay, but those girls who did Blue is the Warmest Color [Léa Seydoux and Adèle Exarchopoulos] were like…it was fucking hard work, you know what I mean? I think sometimes great auteurs—which Robert certainly was… And also when you look back on it, at the time, he was striving for greatness and immortality, absolutely. But also, it was kind of simpler than we think it was.

Related: That Awesome Patti Smith/Robert Mapplethorpe Memoir Is Going To Be A Movie

How do you mean?
He wasn’t always thinking, This flower means this. But more like, This is a beautiful image of a flower. I think he was attracted to the beauty in images, but he was ruthless in getting what he wanted. Which I sort or respect, artistically—if you can deliver.

I can’t help but come back to the fact that you’ve been on the other side of that relationship. You’ve been, for lack of a better word, an object on film. How do you avoid…
Being exploited? How long have you got, you know? I think you have to be frank and honest. You have to stand your corner creatively and you have to know where your line is. I dunno. It’s a good question and it’s not necessarily one I have an answer for. You hope that you work with good people.

But I would let Robert take a photo of me.

I was going to ask.
Yeah, I would’ve. I’d have probably taken my clothes of as well.

Yeah, where would your line be?
I’d draw it somewhere.

Do you think he was someone you’d want to be friends with?
Yeah. Yeah, I do.

Do you have a favorite photo of his?
I love the one where he’s got the devil horns. That’s pretty brilliant. I love the one of Princess Margaret.

Oh, that’s kind of meta…
With the choppy sea and a bottle of gin! That’s sort of amazing. There are some that I couldn’t get my head around. The one with the penis…

The one with the penis…
Well, the one where he’s got a finger in the [urethra]. It makes me [cringe], but I can’t help but return to the image. I didn’t expect to like the cock photos as much as I do! [Laughs]

This isn’t the first gay cultural figure you’ve played. You starred as Christopher Isherwood in Christopher and His Kind. Do you seek out these roles or do they find you?
Funny, that, isn’t it? They find me. It must be my inner gay! [Laughs] I just think those two people as well, [Isherwood and Mapplethorpe], it’s the writer and the photographer, that’s the bit that [I hook into]. Also, I’ve got quite a lot of gay friends, and I’ve always been quite fascinated by gay culture. Is that even and idea? You know what I mean? There’s so much I don’t know about the gay world.

Well, for your role in Mapplethorpe in particular, I’m really curious what research you did, if any, into the gay leather scene. Because that definitely is a particular subculture—and one that really doesn’t seem to have changed much, aesthetically at least, since Mapplethorpe was photographing it.
That’s what I’m saying. There are all these different pockets. And also, so many of my friends who are gay, they’ve all gone through this moment in their life—quite early, or even quite late—when they’ve had to go, “Oh, by the way everyone, I’m this. And you all thought I was something else. Or presumed.” I find that quite weird. I think that’s such a difficult thing because you shouldn’t have to define yourself as anything, ever.

And I think subsequently it makes gay men quite resilient. A lot of my friends are, anyway. And I think Christopher and Robert were.

It’s different when you’re playing a real person as opposed to a character that you have hand in creating with your performance.
Yeah, it is, but the same principals apply, weirdly. There’s a fine line between wanting to represent them but not making it an imitation. The bit that we’re interested in as artists and actors is the moment of ignition onscreen where the story and the character meet with the actor and his or her history. What’s really good about a story like this is you get to explore an amazing scene and culture, New York in the 70s, when it was difficult being gay. When the AIDS epidemic was just fucking insane. Little pockets of life.

If I keep getting to do that, then that’s why I keep taking jobs like this.