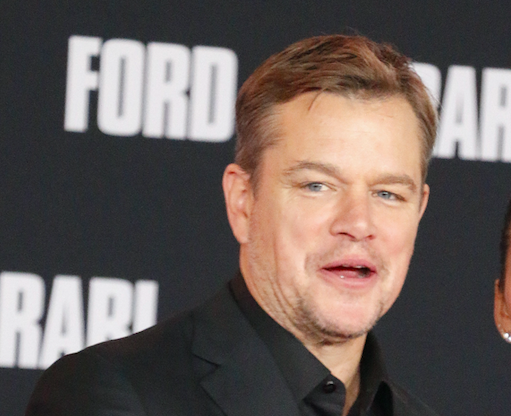 Matt Damon continues to dig himself into a deeper hole after admitting to a reporter that he jokingly used the word “f*g” up until just a few months ago. Now, he’s changing his story, insisting he’s never actually used the antigay slur despite admitting otherwise.

In case you need a recap: In an interview with the U.K.’s Sunday Times, Damon said he used the “f-slur for a homosexual” until his daughter recently informed him it was, in fact, homophobic.

“I made a joke, months ago, and got a treatise from my daughter. She left the table. I said, ‘Come on, that’s a joke! I say it in the movie Stuck on You. She went to her room and wrote a very long, beautiful treatise on how that word is dangerous. I said, ‘I retire the f-slur!’ I understood.”

(Quick aside: We’d also like to point out that, in that same interview, Damon used the word “homosexual”, which GLAAD’s Media Reference Guide notes is considered offensive as it is “aggressively used by anti-gay extremists.” The word is restricted by several major media outlets, including The Associated Press, The New York Times, and The Washington Post.)

Now, Damon has rushed out a lengthy statement walking everything back and claiming that he’s never actually used the antigay slur in his “personal life” and, in fact, does not “use slurs of any kind.”

In the statement, the 50-year-old offered a slightly different version of the story he told Sunday Times:

During a recent interview, I recalled a discussion I had with my daughter where I attempted to contextualize for her the progress that has been made – though by no means completed – since I was growing up in Boston and, as a child, heard the word ‘f*g’ used on the street before I knew what it even referred to. I explained that that word was used constantly and casually and was even a line of dialogue in a movie of mine as recently as 2003;  she in turn expressed incredulity that there could ever have been a time where that word was used unthinkingly. To my admiration and pride, she was extremely articulate about the extent to which that word would have been painful to someone in the LGBTQ+ community regardless of how culturally normalized it was. I not only agreed with her but thrilled at her passion, values and desire for social justice.

He added that he’s never actually called anyone the antigay slur in his personal life (on camera, of course, is another story) and, more importantly, he supports LGBTQ people 1000%:

I have never called anyone ‘f****t’ in my personal life and this conversation with my daughter was not a personal awakening. I do not use slurs of any kind. I have learned that eradicating prejudice requires active movement toward justice rather than finding passive comfort in imagining myself ‘one of the good guys’. And given that open hostility against the LGBTQ+ community is still not uncommon, I understand why my statement led many to assume the worst. To be as clear as I can be, I stand with the LGBTQ+ community.

OK, just so we have this straight: Damon said he used the antigay slur a few months ago “as a joke”, presumably at a family dinner since his daughter “left the table” in protest. But he also said he’s never actually called anyone that word in his “personal life” and doesn’t “use slurs of any kind.” Except, um, when he’s joking around his family at the dinner table.

Now, how about some tweets?

Just outstanding that Matt Damon told his "I learned not to use a homophobic slur at 50" like it was a heartwarming anecdote of lifelong learning. Like your nan enrolling in a watercolour class at the local college, but for not saying the n-word.

Everybody:
The national news media:
The trades:
TMZ:
Matt Damon: Y’know I said f*gg*t until like last Tuesday?

At this point, Matt Damon’s daughter needs to just send him several invoices. Gave him free PR training TWICE, just for him to still be this embarrassing!!! pic.twitter.com/XBwRjsAUO4

If Matt Damon has been using homophobic slurs all this time, you know he’s been using racist and sexist ones too.

Liza Minnelli has outlived Matt Damon saying “faggot.” Damon admitted he recently stopped using the slur because his daughter told him it was taboo. He explained he retired the “F-slur” because it’s no longer used the same way as when he “was a kid.”

My favorite thing about this Matt Damon thing is he told on himself. This didn’t leak, he literally told us.

Matt Damon before and after having a daughter. pic.twitter.com/BhQeyn7cJn

also I hate to start "gay actors for gay roles" discourse but Matt Damon was Bafta, SAG and Golden Globe nominated for Behind the Candelabra, a gay role largely about homophobia in the 1980s and the Aids crisis, so this type of shit is partly why people get so frustrated by it!

Matt Damon at the table with his daughter: pic.twitter.com/CBar33bwRc