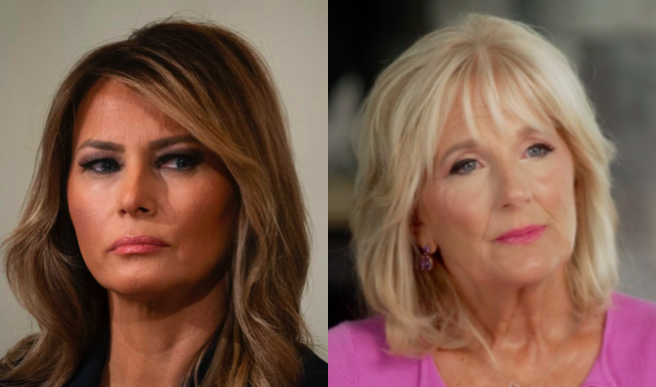 For the last 100 years, during administration changes, the outgoing First Lady invites the incoming First Lady over for tea and a tour of the White House family quarters. It’s one of her last unofficial duties as FLOTUS and part of that whole peaceful transition of power thing.

But it doesn’t appear Melania plans on doing that because time is quickly running out and nothing has been scheduled.

“We have not heard from the First Lady’s office,” Michael LaRosa, spokesman for Dr. Biden, confirms.

Related: As Melania looks back on the legacy of #BeBest, the rest of Twitter tells her to #BeGone

If Melania doesn’t reach out to Dr. Biden’s office to arrange a meetup before she and Trump hightail it out of D.C. next Tuesday evening, it will mark the first break in the 100-year-old tradition in decades.

Of course, none of this is the least bit surprising, TBH.

Over the last four years, Melania has been very selective over which traditions she chooses to uphold, and she almost always does so half-assed and begrudgingly. Also, she’s been bleeding staff since last week’s insurrection so she has less people to help her carry out her responsibilities.

But Dr. Biden isn’t letting the snub get the best of her. She’s been focused on putting together her East Wing team and planning her priorities for when she takes up residence at 1600 Pennsylvania Avenue once it has been properly disinfected.

“In 2011, Michelle Obama and I launched Joining Forces to support military service members, veterans, their families, caregivers and survivors,” she tweeted yesterday. “As a military mom, I was so proud of this work and I couldn’t wait to get our White House team started.”

In 2011, @MichelleObama and I launched Joining Forces to support military service members, veterans, their families, caregivers and survivors. As a military mom, I was so proud of this work and I couldn’t wait to get our White House team started. 1/2https://t.co/QUdgS23IFz