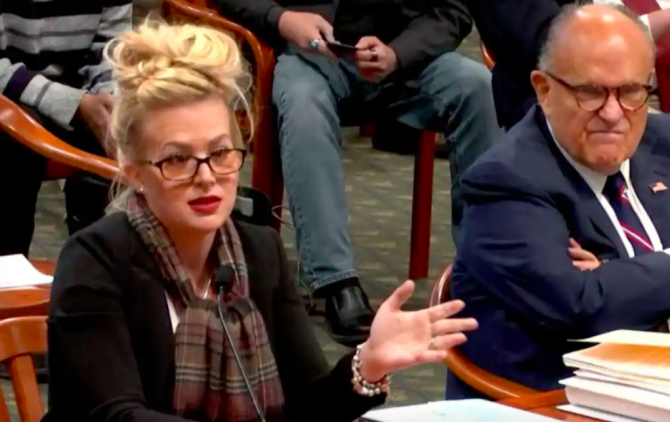 If you do a Google image search for “drunk woman” right now, Melissa Carone is the first result to pop up.

But don’t just take our word for it. See for yourself…

— Cami Carlson. We will fix this then drink Scotch? (@ThePrettyEdge) December 4, 2020

Carone has certainly earned her place in Google’s algorithm.

Earlier this week, video of her speaking before the House Oversight Committee in the Michigan state legislature went viral, racking up tens of millions of views in a matter of hours. If you haven’t watched it yet, you should. It’s must-see entertainment.

Carone, a freelance IT worker who was billed as a “whistleblower” and “star witness” by Trump’s legal team, was there to speak about alleged election fraud she witnessed while working in a large vote-counting center in Detroit.

But rather than answering state officials’ questions, Carone spent her time attacking each of them personally, interrupting any time they spoke, and delivering sarcastic responses to their serious inquiries.

At one point, she struggled to explain what her actual job was. At another point, Rudy Giuliani appeared to try and rein her in but to no avail.

People have already begun doing impersonations of the whole debacle, some of which are spot on…

holy shit there’s more footage of the lady in the trump trials pic.twitter.com/OeMEUE64WV

Some wondered if Carone was drunk during her testimony, given her slurred speech and barely coherent sentences. Others questioned whether she might be homeless, based on her disheveled appearance.

Then there are those who believe she might have been a paid actor after a profile for someone named “Mellissa Carone” (spelled with two L’s instead of one), who is from Detroit and bears a similar resemblance to Melissa Carone (one L), was discovered on a local talent scouting website.

Regardless of whether or not she’s a professional actor, Ms. Carone put on quite a show.

Here’s what folx on Twitter have been saying about it…

Rudy’s star witness appears to be some drunk soccer mom he picked up at the local watering hole.

So a Judge finds Melissa Carone not credible. The GOP puts her up as their star witness. She’s slurring her words, fully on a good drunk & her hair looks like Tippi Hedrens in The Birds. The GOP has reached an all-time low, then, Rudy farts. It gets more bizarre everyday.

Melissa Carone is every drunk white girl getting into a political argument while the bar is closing down.

I can’t be the only one getting these vibes pic.twitter.com/L35SgS784D

Melissa Carone “testified” that she deleted all her social media as a result of coming forward… except her Facebook page is public and she posted a pic with Rudy 4 hours ago. My how easily the lies flow. No wonder they object to being placed under oath.

Who would win in a drinking contest between Melissa Carone and Judge Jeanine Pirro? pic.twitter.com/QDxOJly5Jy

Melissa Carone needs to made an example of with these spurious affidavits being filed. She needs a cross-examination and jail time for making allegations based on “her feels”. They think it’s a game and they’re getting away with it.

I believe Melissa Carone was trying for an Elle Woods moment. Unfortunately, she wound up making a James Woods movement. pic.twitter.com/ifaNvERB94