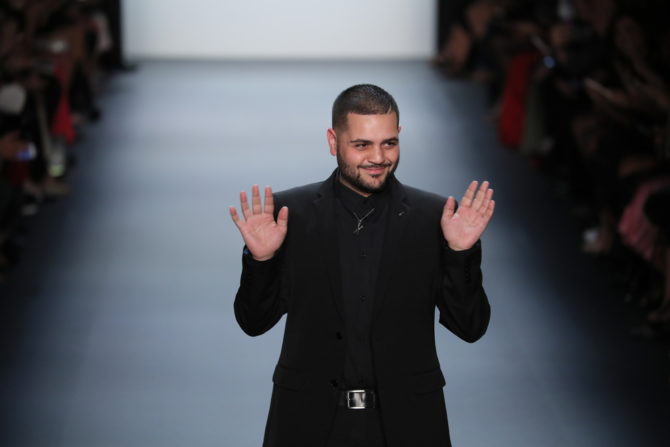 Fashion designer Michael Costello made headlines this week when he accused Chrissy Teigen of bullying. But things sort of blew up in his face when fashion photographer Jordan Liberty came forward to accuse him of sexual harassment.

First, the backstory… On Monday, the Project Runway star took to Instagram to share a story about Teigen he says he’s been carrying with him for more than half a decade.

“For the past 7 years, I’ve lived with a deep, unhealed trauma,” he wrote.

Costello alleged that in 2014, Teigen “apparently formed her own opinion of me based on a Photoshopped comment floating around the internet which has now been proven to be false by Instagram and since taken down.”

When he tried to explain to her that the comment was fake, she refused to listen and “told me that my career was over and that all my doors will be shut from there on.”

Afterwards, Costello says colleagues in the fashion industry told him that Teigen and her stylist, Monica Rose, were going “out of their way to threaten people and brands that if they were in any shape or form associated with me, they would not work with any of them.”

Costello also shared screenshots of direct messages allegedly sent by Teigen in which she wrote, “Racist people like you deserve to suffer and die. You might as well be dead. Your career is over, just watch.”

“I wanted to kill myself and I still am traumatized, depressed, and have thoughts of suicide,” Costello said. “I am not okay. I may never be okay. But today, I am choosing to speak my truth.”

Costello was met with an outpouring of support from his 1.5 million followers. Until two days later, when fashion photographer Jordan Liberty entered the chat.

After hearing Costello’s story, Liberty took to Instagram to tell his 290K followers that the “gloves are off” then accused the designer of sexual harassment.

“Michael Costello called out Chrissy Teigen this week for cyber bullying and has everybody pissed at her,” he said in his Instagram stories. “Meanwhile, he sexually harassed me while I was going through chemotherapy.”

According to Liberty, Costello slid into his DMs back in 2017. At the time, Liberty was undergoing treatment for cancer.

The two struck up a friendship and Costello eventually asked if he would like to shoot an upcoming collection he was working on. They agreed to meet up “at some açaí bowl place” to talk about it the next day and then, Liberty says, Costello sent him “a collage of dick pics.”

Liberty says he wrote back saying he was “flattered” but that he wanted to “keep things professional.”

That’s when he says the designer got “kind of like weird.” The next day, he changed their meeting time. Then he did it again. And again. When Liberty called to ask if everything was OK, he says Costello unleashed on him, saying “some really horrible things on the phone.”

“He basically, like, was horrifying to me. Hung up the phone. Blocked me. I’ve been blocked ever since.”

“I really truly believe in doing the right thing and speaking up for myself,” Liberty said. “It’s something that I’ve gone through a lot of therapy to do. I’m certainly not a victim of any situation, but these situations need to be called out.”

Costello hasn’t specifically responded to Liberty’s allegations, but he did post a statement saying that his “heart is at peace” and he’s “not going to address any more issues in regards to … false stories from those who aspire to clout chase.”

“I have spoken my truth and I’m going to leave it as is,” he added. “The public can interpret however they like, but you know who I am.”

So how exactly is the public interpreting the whole thing? Let’s have a look…

According to the @BusinessInsider, Chrissy Teigen’s representative claimed that Michael Costello faked the DMs that showed her “bullying” him. Since Costello’s accusation, multiple people have had claims against him for body shaming, sexual harassment and overt sexism. pic.twitter.com/S4hh6UmruI

This Michael Costello crap is crazy. I think he prolly is an asshole designer.

Did @mikecostello apologize to Jordan Liberty for sexual harassing him while going thru chemotherapy? Probs not.

That is crazy. Michael Costello wants to blame a 3 sentence DM by Chrissy Teigen for him being suicidal? What were they supposed to believe? Obviously he has issues. And still has issues he needs to work with a therapist, not on social media.

Anyone who watched him on project runway knows there’s something off with that guy.