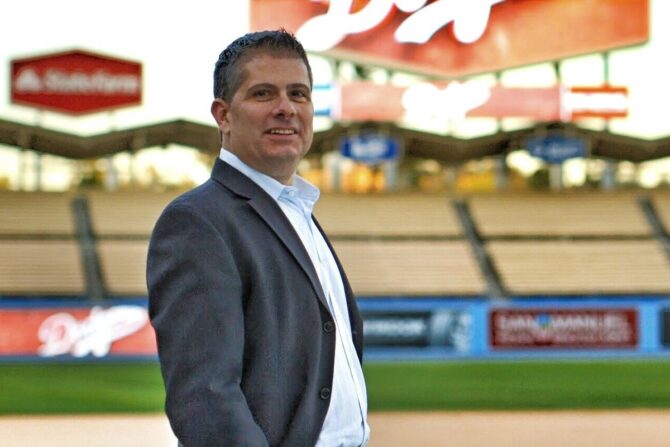 When it comes to storybook romance, Dodgers Senior Vice President Erik Braverman and his now-husband Jonathan Cottrell knocked it out of the park.

Their love story began in 2019, when the pair met on vacation in Puerto Vallarta, Mexico. “We happened to be at the same swim-up bar, sipping piña coladas,” Braverman told the New York Times. “We gravitated toward each other.”

And Cottrell wasn’t just in it for Braverman’s connection to the Dodgers. In fact, he wasn’t a sports fan at all when they met.

“When I asked what he did and he told me he worked for the Dodgers, I said, ‘I’m pretty sure that’s baseball, right?’” Cottrell said.

But Cottrell grew to love the game as much as Braverman, leading to their picture-perfect wedding in Dodger Stadium on January 21 of this year.

The two wore blue tuxes to rep the Dodgers colors and said their vows on the pitcher’s mound. Their 75 guests, who included every senior executive from the Dodgers’ front office as well as the team’s president and CEO, sat in a diamond formation around the field to watch the couple say “I do.”

“It was not lost on those who were baseball fans that we were dancing and having a celebration on the same infield that Steve Garvey, Davey Lopes, Bill Russell and Ron Cey were in,” Braverman told Outsports.

“I think for those who weren’t baseball fans, they just thought, ‘This is a really, really cool experience.’ But for those of us who are baseball nerds, it was extra special.”

For Braverman, who’s been with the Dodgers since 2009, his wedding to Cottrell on the diamond reflects how much progress the baseball industry has made since he started. Major League Baseball “was not known for being inclusive when I accepted my job,” he said. “It had been a concern to me.”

But Braverman was fully accepted when he came out to his colleagues in 2015. “Everyone from the ownership down embraced and supported me,” he said.

And the Dodgers’ support of the LGBTQ+ community extends beyond Braverman: the team has partnered with several local Pride organizations, and their annual LGBTQ+ Night has its ninth anniversary this June.

“From my perspective, it’s a little overwhelming,” Braverman said of his wedding. “But we couldn’t be more proud of the moment. And as a longtime Dodger employee, the Dodgers have always prided themselves on being inclusive dating back to Jackie Robinson breaking the color barrier 75 years ago this year. And to be a part of it makes it that much more special for me.”

“To be able to come to the venue where I thought I would have to hide my identity, and to be able to actually celebrate marrying the man I love here…” Braverman continued. “I never envisioned this day would happen.”

We’re proud of Braverman for being such a positive representative for LGBTQ people in sports, for being so open about his journey, and, of course, for finding love. Play ball!