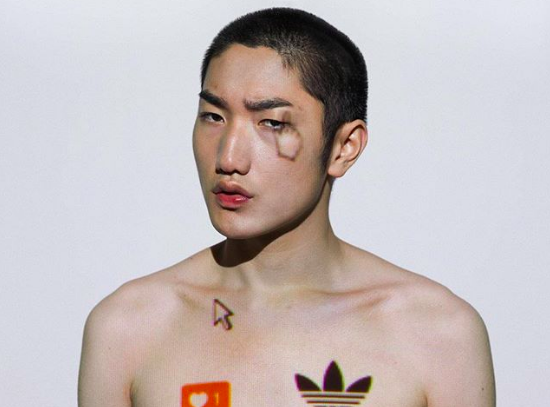 Chufue Yang is a Chicago-based model. This week on Instagram, he announced he had been dropped by his agency.

“Recently, I was dropped by my agency @fordmodels,” Yang informed his followers. “The glass ceiling capped on people of color, especially queer people of color prevails.”

Now, in a new interview with Dazed, the 21-year-old is opening up about exactly what he believes happened and what he’s learned from the experience.

“What I’ve also learned is that some narratives are changed by others within the industry to make them seem more interesting or marketable,” he says.

“My agency not only changed my height (on my comp card), but my ethnicity was erased in certain instances.”

Yang recounts the time he was featured in an article on models.com:

The title to my feature was ‘Minnesota via Mongolia’. Although it could’ve been a simple mistake, being misidentified ethnically is something that not only me, but a lot of Asian Americans experience daily. I made an Instagram post expressing those feelings and when my agent saw it, they wanted me to take it down because they didn’t want to ruin the relationship they had with models.com.

@modelsdot I want to thank you for the new face feature, but assuming my cultural identity is a tad bit disheartening. I do not hail from Mongolia, nor do I have Mongolian roots. I'm a first generation Hmong American. Hmong is not a place, it's a people that can be found all throughout South East Asia and some parts of China. I'm sure this was just a mistranslation and to some it might seem like a simple mistake, but the fact is, being misidentified in regards to my ethic origin is something that I and many other Asian Americans know too well (especially those who identify within South East Asian ethic groups). Be aware, be thoughtful and be open to learning where others come from. I'm in no way criticizing @modelsdot, but simply shedding light on the situation. ??

Little did Yang know, his troubles were only just beginning.

“After the whole models.com incident, things started to get rocky,” he explains.

He booked a few gigs here and there, but quickly learned that clients didn’t seem interested in working with him.

“It seems as though my height, mono-lids, and black hair didn’t make the cut, because the emails about jobs started to decrease,” he says. “Not getting booked for things definitely started to take a toll on how I viewed my self-worth.”

“I think my agents probably felt that I wasn’t committed to my career anymore which wasn’t the case at all.”

Recently, I was dropped by my agency @fordmodels. I can sit here and find multiple reasons to be upset, but measuring my self worth to being signed doesn’t really seem like the mindset to wallow in. But I still can’t help but wonder, perhaps things would’ve been different if I would’ve been honest about myself from the beginning. For example, having my comp card say that I was taller than I really was had already diminished my identity from the get go. It also forced me to follow the illusion and “standards” of the industry. Being 5 foot 10, Hmong American (my ethnicity for those of you that don’t know) and gay already challenges the industry in itself and for a while I thought I wasn’t getting booked because of those reasons, when in reality.. that’s exactly why. The glass ceiling capped on people of color, especially queer people of color prevails. The blame is not on my previous agents, not on my previous agency but on the industry and myself for not having a firmer stance on my values. What I’ve learned is to not lose your voice in an industry where your physical features are placed above everything else, especially your identity. Chapter closed and moving forward. Photographed by @bputerbaughphoto and styled by @katherinerousonelos.

Looking back, Yang feels the agency did him a disservice by not marketing him as who he truly is: a queer man of color.

“I’m the first QPOC that they’ve ever signed onto their men’s board and instead of marketing me for me, I felt like they wanted me to fit me into a mold,” he says.

Today, he is no longer with that agency and is instead focusing on continuing his education, though he hopes to return to modeling one day.

“M focus has shifted to my education full time, but I hope to model again in the future,” he says. “Being a model, for me, is just a stepping stone to a bigger platform. At the end of the day, I want to travel the world, educate, inform and connect.”

Related: Barrett Pall talks about the dark underbelly of male modeling, says being gay makes it “much harder”