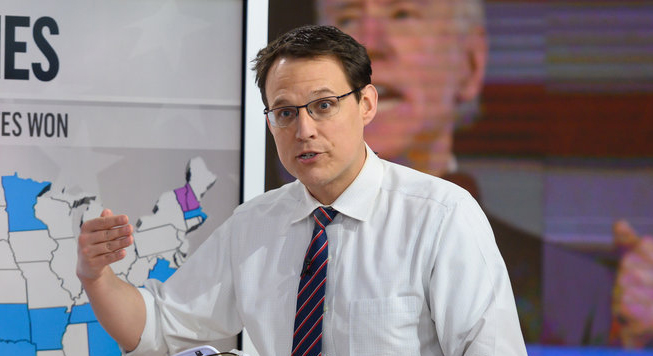 The openly-gay Kornacki shot to infamy thanks to his number-crunching on the electoral map during MSNBC’s Election Night 2020 coverage, thanks to his continuous analysis of the shifting vote totals. At one point, he even did a full 44-hour stint on the cable channel without a break for sleep. Kornacki proved so popular on social media with viewers that the network even installed the “Kornacki Cam” to document his work, even during commercial breaks. His stamina and analysis also prompted viewers to see him as something of a sex symbol, dubbing him “Korsnacki,” “map daddy” and “chartthrob,” among other nicknames.

“Steve captivated millions of viewers during election season and we’re excited that this Sunday he will turn his focus to playoff season,” executive producer of NBC Sports, Sam Flood, said in a press release. “As we push to the playoffs, who better to spot the trends, make the call about division and conference races, and identify the toss-up games that can flip the standings than the man in the khakis.”

Kornacki will officially join the program Sunday night for the Broncos-Chiefs game.

The new job is just the latest triumph for Steve Kornacki. In addition to his Election 2020 tour-de-force, he also landed a spot on People Magazine’s “Sexiest Men Alive” list.