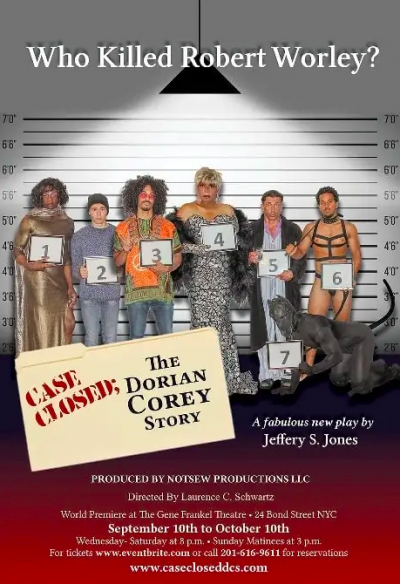 Dorian Corey was the notorious drag performer (seen in the classic doc Paris is Burning) who, after dying of AIDS in ‘93, turned out to have a Naugahyde-wrapped dead body stashed away in her closet.

The corpse happened to be that of convicted rapist Robert Worley—a/k/a “Bobby”–and however that creep ended up in the closet, Corey was no doubt afraid to notify the cops about what had happened, tucking the evidence away for years like a bad wig.

Dorian’s (and Bobby’s) astounding trajectory has been the subject of much media, including a 2019 plotline on Pose.

Well, the closet door has been opened up yet again. A new play–Case Closed: The Dorian Corey Story by Jeffery S. Jones at the Gene Frankel Theatre—is a “surreal murder mystery with a comedic twist” about that very subject. Directed by Laurence C. Schwartz, the play incorporates information the playwright got from one of Dorian’s closest associates.

Case Closed shows Dorian (Scott Weston) as a jaundiced but generous queen who has been used and oppressed for years, but always lights up a nightclub with her sass and stamina.

In the period-jumping Act One, Dorian is being interviewed about her travails on one side of the stage while her drag friend Velma (Isaac Dean)—based on a real person that the author spoke to en route to writing this play—is being interrogated by a condescending police detective on the other, the cop desperate to treat Velma as a suspect because he can’t believe just one person did the killing.

For Act Two, we go back to 1967, when Dorian’s Harlem apartment is populated with various friends and strays, including Velma herself. Dorian is welcoming anyone who’s part of the community and the least bit needy. And suddenly, Dorian’s ex, Bobby (Matt Braddak), has welcomed himself to the fold. The well-hung, loose-morals louse has come back to stir up some trouble with his sleazy, manipulative behavior, though he’s summarily thrown out after it seems that he’s purloined everyone’s valuables.

He comes crawling back anyway and tries to woo Dorian, but after a tussle leads to Bobby rolling around in a battle with one of the housemates (an S/M go-go boy), Dorian shoots him dead, looking shocked as she does so. And then we’re back to ’94, when Velma is saved by an old cohort who’s become a big lawyer, though she confides that it was she who had stolen the valuables in order to make Bobby look even worse, so they could all agree to eject him from their lives.

It’s complicated stuff, full of both warmth and shade, and it’s nicely pulled off by all involved. But honey, don’t mess with a drag queen.

TIDBITS FROM MY OWN CLOSET

Let me now pop open some mothballs and look through my old Playbills and press releases and talk about funny girls past and present.

You’ve surely heard that Beanie Feldstein (who plays the world’s most famous bottom, Monica Lewinsky, in Impeachment: American Crime Story) will be Fanny Brice in the 2022 Broadway revival of Funny Girl, the role that made La Streisand a sensation and later nabbed her an Oscar. Well, a Facebook pal who had spoken at length to Jule Styne before the composer’s death in ’94 says the talked-about ‘90s revival with Taylor Dayne didn’t happen because, after Styne coached her at length, he still didn’t feel she could sing it, act it or be funny enough. (Dayne—who infamously performed at Mar-a-Lago last New Year’s Eve–tells it differently, saying that by the end of her audition, Styne gushed, “I’ve found my Fanny!” Feel free to add your own interpretation.)

Meanwhile, the source says that Styne felt another possible Fanny, Sandra Bernhard, was funny, but not quite there in the vocal department. Styne would have loved Streisand to do the part again in her 50s, but he knew she was not about to return to Broadway. But since Barbra did the film sequel, Funny Lady, maybe she can now be coerced to star in Funny Old Lady? Maybe not. Anyway, break a nail, Beanie. As for whether or not you’ll be able to belt “Don’t Rain On My Parade,” anyone who rains on your parade this far in advance just isn’t a “people who need people”.

One more casting tidbit about a funny lady: Someone needs to do a series based on the life of Totie Fields, the zingily self-deprecating comic who achieved fame in the 1960s despite all odds, eventually suffering from diabetes and other ailments. With The Marvelous Mrs. Maisel and Hacks in the air, retro femme comedy is of the moment, and I’d say my pal Mindy Cohn (Natalie from The Facts of Life) was born for the part. Take note, producers!

As for the world of drag comedy and other unearthly delights, Frankie Sharp—-one of the promoters behind the successful multilevel venue the Q—-told me about an enticing new project he’s involved in. Boxers’ Bob Fluet and George Maestre are the main owners–with Frankie and Alan Picus as minority partners–of yet another HK boite that’ll be aiming for your eyeballs and eardrums. These guys–basically the Q team plus one–will reopen the old Therapy bar space as Hush, and it’s no longer hush-hush that this will happen mid-Fall and the booker/program director will be Marti Gould Cummings. Sharp tells me that the place will give you “sexier vibes on the weekend and drag and a wide array of cross-genre performance shows throughout the week.” And I’m available…let’s see…every night.

An oldie but goodie, the Chelsea drag bar Barracuda celebrates its 25th anniversary on September 26th,, but owner Bob Pontarelli doubts there will be a 30th, due to the decline in business because of COVID, plus the rise in rents resulting from businesses taking over Chelsea. All the more reason to throw on some lipstick and run there now.

But first, there was a Fashion Week stop at longtime promoter Susanne Bartsch’s UGGs celebration at her SONY Hall weekly event called “New York, New York”. When I walked into the Bartschland madness, two thonged musclemen were engaging in some kind of crazed calisthenics contest onstage, and they were the only scantily clad ones in the room; everyone else sported layers upon layers of shiny stuff and feathers for a foofy fashionista effect of lewks that were totally through the lewking glass.

Put that in your closet. And no one said “UGGH”.