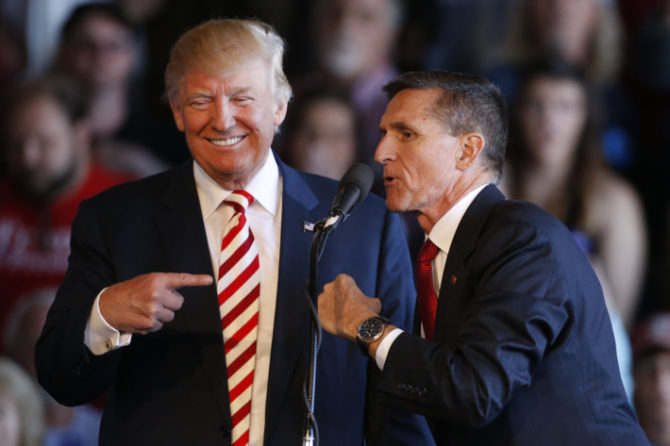 Just hours earlier, senior Trump adviser Kellyanne Conway went on MSNBC and said the president had “full confidence” in Flynn, which was then quickly contradicted by White House press secretary Sean Spicer, who told reporters that Trump was “evaluating the situation.”

The confusion came after days of speculation over whether Flynn had discussed sanctions implemented by President Obama with the Russian ambassador in December, then lied about it to Vice President-elect Mike Pence.

In their Christmas week conversation, Flynn reportedly urged the ambassador to convince the Russian government not to retaliate against sanctions from President Obama over Russia’s involvement in the U.S. presidential election, assuring him that whatever the Obama administration did could be easily undone.

Just days before Trump’s inauguration, Vice President-elect Pence denied that Flynn and the ambassador had talked about sanctions. Pence said that he’d personally discussed the matter with Flynn, who told him that the talk was more of a casual chat involving Christmas wishes.

“They did not discuss anything having to do with the United States’ decision to expel diplomats or impose censure against Russia,” Pence said on CBS News’ “Face the Nation.”

Flynn, a retired general, still hasn’t explicitly admitted he lied to Pence. In his resignation letter, he says he “inadvertently” briefed Pence and top White House officials with “incomplete information.”

Right. So he remembered saying “Merry Christmas” but not the part about highly sensitive matters of national security.

After serving as national security adviser for less than one month, Flynn is both the latest embarrassment for the young administration and another worrying tie between Trump and Russia.

It remains unknown if Flynn was acting on the instruction of then-President-elect Trump or another administration official in his dealings with the ambassador.