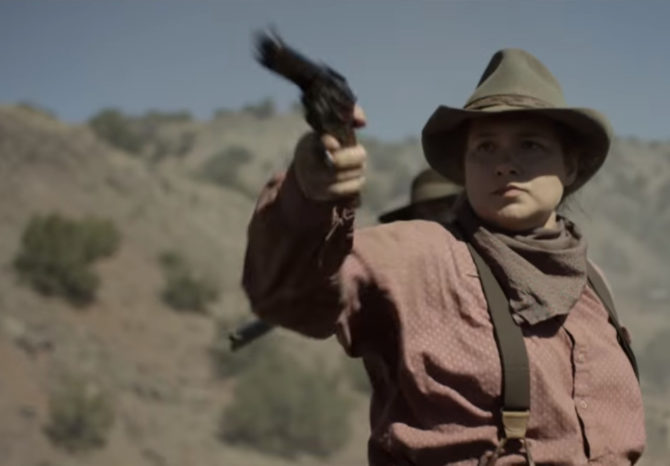 For anyone already sick of holiday specials, Christmas carols and all things warm and fuzzy (not counting warm and fuzzy men, of course), Netflix has come out with yet another compelling project with a great queer twist. Much as Suburra added a gay twist to a crime soap opera, Godless finds the gays among the gunslingers.

Believe it or not, plenty of westerns have had gay characters—or at least, gay overtones—before. Critics have long detailed the homoeroticism of Calamity Jane, Johnny Guitar, Butch Cassidy and the Sundance Kid, Red River and more, though rarely, if ever, did a film or television series have the gall to feature an actual same-sex relationship.

Enter Godless. Unlike the romantic westerns of John Wayne and Roy Rodgers that portrayed the Old West as a colorful land of adventure and excitement, Godless imagines the Old West as its namesake–a faded wasteland of rape, murder and punishing nature. Yet, in the midst of it all, two very strong women find fierce love for one another. 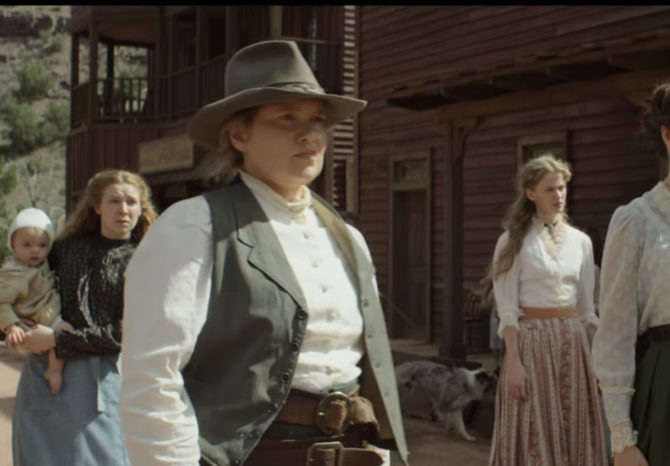 Even better, they act downright heroic. In the town of La Belle, New Mexico Territory, mining and lawlessness reign supreme. After an accident claims the lives of 83 men—most of the men in town, in fact—Mary Agnes McNue ascends to a position of power. The widow of the late mayor, she takes on executives duties herself, dressing in a conspicuously masculine suit and organizing the women in town to take over mining operations. She also shacks up with a former hooker turned school marm, Callie Dunne, setting off town gossip about what about beavers interests the two ladies, other than fur pelts.

As played by actress Merritt Weaver, Mary Agnes (or Maggie, among friends) makes no apology for taking on duties usually reserved for men. In fact, she makes her love for Callie no secret, and the two have the most passionate and compelling relationship in the series, although it is certainly not without complications, including Maggie’s intense jealousy. Maggie also represents the natural and honest evolution of characters like Johnny Guitar’s Vienna—the role made famous by Joan Crawford. Film critics and modern audiences often cite Vienna as an example of a lesbian character veiled in subtext and symbolism to escape censorship. In an era where queer characters can actually exist, Maggie makes for a spiritual successor which embodies all of toughness, resolve and independence that Vienna did, yet one that can also openly love another woman. 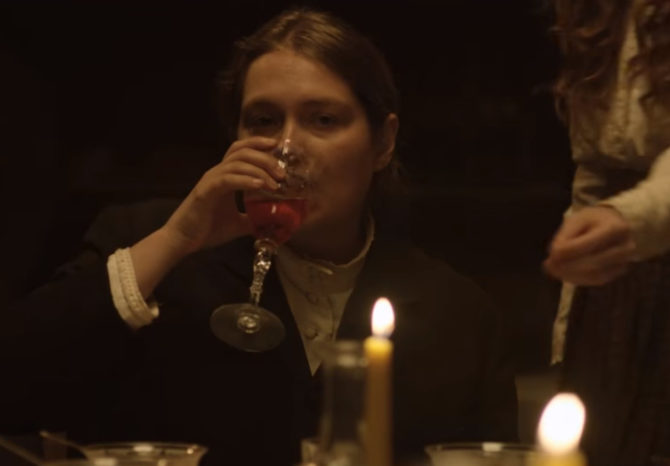 As co-created by Oscar winning writer-director Stephen Soderbergh (Traffic, the Ocean’s Eleven series), and written & directed by Scott Frank (who penned another deconstructionist western, Logan, earlier this year), Godless takes the Old West into the same violent, sexual territory as a series like Deadwood. A major plot of the series revolves around a historical tidbit oft-deleted from history books: the so-called Mormon Wars, in which very polygamous Mormon men turned to thieving and banditry, trying to push back against new settlers to the west.

Of course, the US Government had already driven Mormons out to the Great Salt Lake for crimes of rape, pedophilia and polygamy, so the Mormon bandits, led by the one-armed Frank Griffin (the great Jeff Daniels), feel justified in their attacks–and certainly have no problem killing the women La Belle, or anyone else.

Godless does not soft petal its queer characters–or the heinous actions of its villains, Mormon and not.

God knows we modern queer people know something about those.