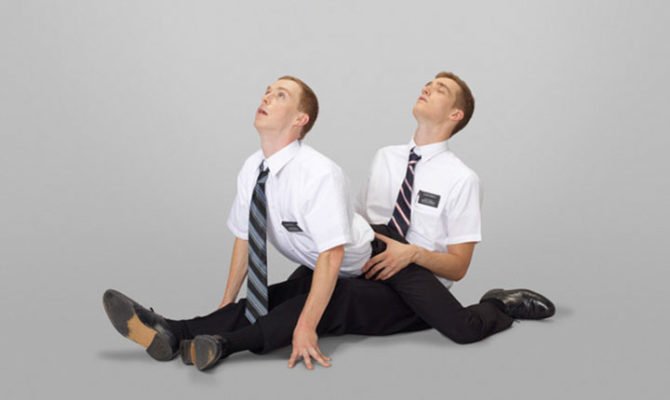 There are undoubtedly scores of documents the Mormon church doesn’t want you to see, but they have one fewer to guard now that MormonLeaks has gotten a hold of it.

One part homophobia and one part misogyny, shaken up with some run-of-the-mill sexual repression.

The leak contains the minutes of a Utah Layton Priesthood Leadership Conference from February 2014, attended by members of the Quorum of the Twelve Apostles and other governing bodies.

The gang discussed issues like religious freedom, agnosticism, and sexuality — the “big three,” according to absolutely nobody.

At one point in the meeting, Elder L. Tom Perry of the Quorum of the Twelve was asked “How do you help a young man or young woman who comes in and says ’I think I’m gay’?”

“Give them association with manly things,” he reportedly said. “Strong men that represent the ideal of relationships, a man who is vigorous and knows the power he holds.”

You hear that? If you suspect a child is gay, just give him a poster of Tom Selleck to put on his ceiling — that should do the trick. If that doesn’t work, sign him up for wrestling — those singlets are bound to take his mind off other guys.

Another topic was how to deal with same-sex couples showing “inappropriate affection” during church services. While they don’t detail what is deemed “inappropriate,” we assume even holding hands is a no-no.

Related: Fetishizing Gay Mormons Will Not Be Allowed At This Year’s Utah Pride Festival, Organizers Say

Elder Perry had some thoughts on this, too:

“I would invite them to come into my office right after and let them know they were out of line. I would let them know that repentance is possible… [But] adultery is still adultery. Fornication is still fornication. We should continually warn those living in sin that they are jeopardizing their eternal salvation.”

“This evil will divide our nation in half,” Perry said of the LGBT equality movement. “You know they will never stop. They move one inch at a time until they have forced upon all. Unfortunately the Supreme Court is listening to the voice of the people through the administration that is currently in place.”

And these guys are tax-exempt… why exactly?

Here are the full minutes, if you care to dive that deep.