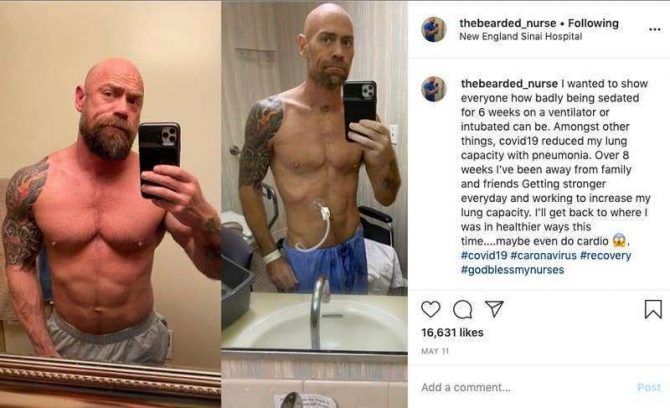 Mike Schultz, a gay San Francisco nurse who contracted COVID-19 at the Winter Party in Maimi, has opened up about his battle with the disease. In a new BuzzFeed interview, Schultz reveals he spent more than a month on a ventilator and lost more than 50 pounds.

Schultz, 44, first noticed symptoms on March 17, just after he returned home after a visit to Boston. He ended up spending six weeks in the intensive care unit at the hospital on a ventilator under sedation. When he woke up, he thought only a few days had passed. That illusion came crashing down when he caught a glimpse of himself in the mirror.

“I was so weak,” he says. “This was one of the most frustrating parts. I couldn’t hold my cellphone; it was so heavy. I couldn’t type, because my hands shook so much.”

“I knew what I thought going in [about the coronavirus]. I didn’t think it was as serious as it was until after things started happening,” he lamented. “I thought I was young enough for it not to affect me, and I know a lot of people think that. I wanted to show it can happen to anyone. It doesn’t matter if you’re young or old, have preexisting conditions or not. It can affect you.”

“I didn't even recognize myself.”

Nurse who lost 50 pounds during coronavirus battle posted shocking before-and-after photos of the impact the virus had on his body. https://t.co/PREnxoQPri pic.twitter.com/F3sggwxycN

Schultz also appeared on CNN to discuss his current prognosis. “I’m doing really well,” Schultz told  John Berman. “I’m able to move around and walk and go up and down stairs, and pretty much do anything on my own. It’s just I have to take a lot of rest breaks, and I just know that my lung capacity is not totally there yet.” Schultz also reports that he believes he lost some of his sense of taste.

At least 38 people contracted COVID-19 at the Winter Party in March. Three of those patients have died.