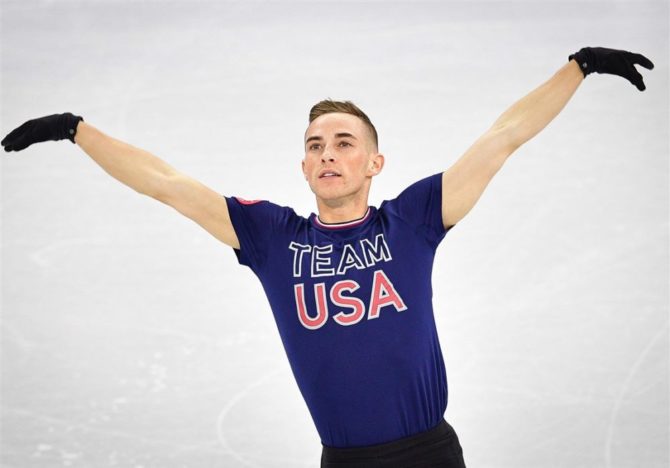 America’s favorite Ice Qween, Adam Rippon, captivated us with his fantastic performance in the Team Skate, in which he earned a Bronze Metal and landed in 10th place in the Individual Men’s Figure Skating competition. That he accomplished this while sparring with Mike Pence, purportedly the veep of the United States, made his performance even sweeter.

For those of us already familiar with Rippon, however, last Sunday’s program–as well as his admission he needed a glass of wine after–came as the latest in a delightful string of irreverent and sassy moments the skater has entertained us with, particularly on Twitter, where he is almost as accomplished as he is on the ice.

With Adam still refusing to meet Pence (good for him), we’ve decided to highlight some of Adam’s best moments in the Twitterverse.

FUN FACT: Being true to who you are and not giving a shit about what others think about you is an awesome and liberating thing whether you are gay or not – Sometimes we the gays need to be reminded more often but, LIKE, EVERYONE SHOULD TRY IT, FOR REAL. JUST DO IT.

It has literally never crossed my mind but like now I kinda wanna pic.twitter.com/K9fRDD6snS

To all those who tweet at me saying that they “hope I fail”, I have failed many times many times in my life. But more importantly, I’ve learned from every setback, proudly own up to my mistakes, grown from disappointments, and now I’m a glamazon bitch ready for the runway.

I’ve been bleaching my teeth for the past few days and now the wind that I create from just talking makes them hurt. Like, I think this is a sign that I’m officially ready for my Olympic debut.

This is a shot from my shoot with @GQMagazine – I’m sitting in a Kohl’s parking lot bush. With the lights from the Taco Bell next door twinkling in my eye, Ryan Pfluger has never made me feel more beautiful. pic.twitter.com/fO2568HJJJ

And for a few older, pre-Winter Olympic, gems…

While you were busy being heterosexual, I studied the blade pic.twitter.com/rsYF2oF08j

I was recently asked in an interview what its like to be a gay athlete in sports. I said that it’s exactly like being a straight athlete. Lots of hard work but usually done with better eye brows.

Related: Gus Kenworthy and Adam Rippon share a tender kiss: “We’re queer. Get used to it.”

With all the negativity in the news, finally some POSITIVE news to share. https://t.co/ZoRCD0PxYO

I’ve captured the attention of my people @Queerty ???https://t.co/tYu7k9T0PN

You’re damn right, you have.