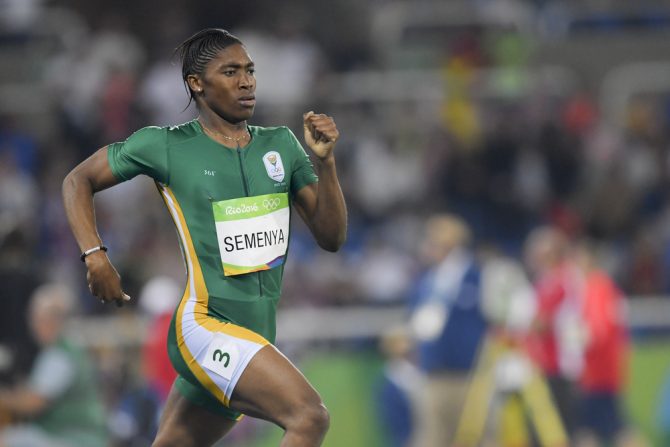 The conversation around sex, gender identity, and how they are defined in the world of sports heats up once again. Caster Semenya, a two time Olympic gold medal winning runner, lost an appeal to the Court of Arbitration for Sport (CAS) to challenge a ruling by the International Association of Athletics Federations (IAAF) that requires her to take testosterone suppressing medication to continue competing internationally at track and field events.

The South African athlete, who was born female and identifies as a woman, is believed to be intersex. Intersex individuals may have several variations in their chromosomes, sex hormones, gonads, or genitals that do not fit the typical definition of male or female. Semenya’s body produces testosterone at an atypically higher rate than most women. Testosterone is found naturally in both men and women, and the amount of it in someone’s body fluctuates throughout the day and throughout their lives.

On May 1st, in a 2-1 decision, the CAS decided that the IAAF could maintain its restrictions on female athletes who naturally produce more testosterone than most women. Any athlete who falls under the rule must reduce and maintain their testosterone at the reduced level of below 5 nmol/L continuously for at least six months before a competition.

To be clear, Semenya was not accused of any wrongdoing or for breaking any rules. The CAS has acknowledged that the ruling was laced with discrimination, but ultimately said, “…the majority of the Panel found that, on the basis of the evidence submitted by the parties, such discrimination is a necessary, reasonable and proportionate means of achieving the IAAF’s aim of preserving the integrity of female athletics.” In athletics, women, especially women of color, routinely have their femininity and womanhood questioned. Male athletes with genetic advantages, like Michael Phelps, are celebrated for their natural superiority in their sport.

This decision presents another hurdle on a journey that began for Semenya in 2009 when her sex and eligibility were first called into question by the IAAF. She has be subjected to various methods of testing over the years to “prove” and test her anatomy and physiology. In a statement she released after the decision, the accomplished athlete remains positive that she will get the last laugh.

“For a decade the IAAF has tried to slow me down, but this has actually made me stronger. The decision of the CAS will not hold me back. I will once again rise above and continue to inspire young women and athletes in South Africa and around the world.”

Semenya is married to her long-term partner, Violet Raseboya.