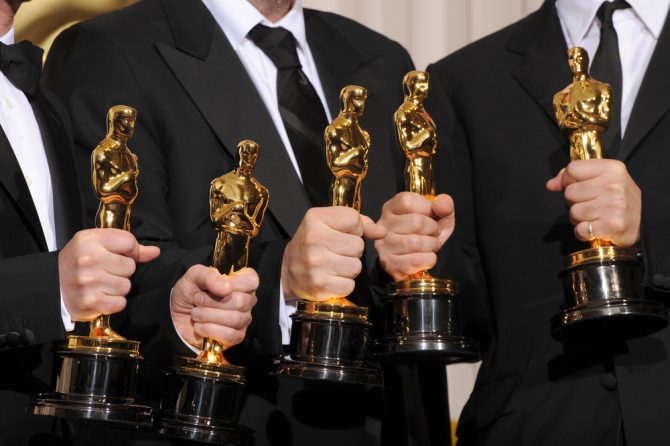 Boy meets boy. Boy kisses boy. But boy, oh boy, they both had better keep their clothes on and step away from the bed.

That seems to be the Academy of Motion Picture Arts and Sciences’ rule when it comes to straight male actors portraying LGBTQ characters onscreen. Breaking them for just a few moments of screen time may have cost Rocketman star Taron Egerton a Best Actor Oscar nomination for his acclaimed interpretation of musical icon Elton John in the 2019 musical biopic.

Egerton was nominated for all the crucial precursors  —  the Critics Choice Awards, the Golden Globes, the Screen Actors Guild Awards, and the BAFTAs  —  and he even won the Best Actor, Motion Picture Musical or Comedy Golden Globe over eventual Oscar nominee Leonardo DiCaprio (Once Upon a Time in Hollywood), and still, he failed to make the final five who will compete for Best Actor at the February 9 Academy Awards ceremony.

The egregious snubbing comes just one year after Rami Malek won the Best Actor Oscar for portraying another LGBTQ musical icon, Freddie Mercury, in a lesser performance that presented Mercury as a more or less straight dude who stole a few kisses from guys under cover of the night. A significantly inferior film, Bohemian Rhapsody scored four nominations (including Best Picture) to Rocketman’s one (for Best Original Song). It’s hard not to raise an eyebrow over the latter biopic’s lukewarm reception from the Academy.

Yes, the Best Actor race was especially crowded this year, with at least four other worthy contenders left out of the running: Dolemite Is My Name‘s Eddie Murphy, The Irishman’s Robert De Niro, Uncut Gems’ Adam Sandler, and Ford v Ferrari’s Christian Bale. Unlike Egerton, though, none of them were batting 4 for 4 in precursor nods when the Oscar nominations were announced on January 13. Neither were first-time nominees Antonio Banderas (Pain and Glory) and Jonathan Pryce (The Two Popes), the two veteran actors who took the up-for-grabs Best Actor spots for which Egerton and the aforementioned unlucky four were vying.

Looking at the last 14 years of straight actors getting nominated for playing LGBTQ characters, it’s clear how far we haven’t come since Brokeback Mountain‘s Heath Ledger and Jake Gyllenhaal appeared to signal the dawning of a new acceptance of gay male sexuality onscreen. Alas, the revolution stalled.

In the last 14 years, a significant number of straight actors have been nominated for Oscars, or won them, for LGBTQ roles  –  including Philip Seymour Hoffman in Capote (he beat Ledger for Best Actor in 2006), Sean Penn in Milk, Colin Firth in A Single Man, Christopher Plummer in Beginners, Matthew McConaughey and Jared Leto in Dallas Buyers Club, Eddie Redmayne in The Danish Girl, Richard Jenkins in The Shape of Water, Mahershala Ali in Green Book, Richard E. Grant in Can You Ever Forgive Me?, Malek in Bohemian Rhapsody, and Banderas in Pain and Glory. The one thing their characters all have had in common: fairly chaste onscreen sex lives, if they’ve had onscreen sex lives at all.

Meanwhile, the gay coming-of-age story Moonlight didn’t score any Oscar nominations in the acting categories, but it ended up beating La La Land for Best Picture in 2018. Its secret: The adult leads didn’t share a single kiss in the movie. It’s worth noting that all 19 of this year’s Oscar-nominated actors, both male and female, appeared in mostly sexless films, but if Scarlett Johansson’s character in Marriage Story had doffed her top and gotten into bed with her divorce attorney, Laura Dern, who played her legal eagle, probably would not be any less of a Best Supporting Actress frontrunner.

In the last decade, female actors have been enjoying considerably hotter sex with each other onscreen, and they’ve still scored with the Academy. Carol’s Cate Blanchett and Rooney Mara were Oscar-nominated despite having explicit sexual scenes, as were The Kids Are All Right’s Annette Bening and The Favourite’s Olivia Colman, Emma Stone, and Rachel Weisz. Colman even won last year’s Best Actress prize over The Wife’s Glenn Close in a stunning upset for the ages!

Call Me By Your Name director Luca Guadagnino apparently had this double standard in mind when he was adapting André Aciman’s 2007 novel with screenwriter James Ivory. Some of the book’s more intimate and explicit encounters between Elio (Timothée Chalamet) and Oliver (Armie Hammer) were watered down or dropped entirely. Ivory, whose screenplay won an Oscar, publicly criticized Guadagnino for sanitizing the book’s sexuality. The director addressed the toning down after a New York Film Festival screening in 2017: “To put our gaze upon their lovemaking would have been a sort of unkind intrusion,” he said. Hmm… He certainly didn’t mind barging in on Tilda Swinton and Edoardo Gabbriellini’s lovemaking in his 2009 film I Am Love.

By Oscar standards, though, Guadagnino’s caution paid off. Call Me By Your Name scored four nominations, including Best Actor for Chalamet and Best Picture. The film is pretty candid in its depiction of same-sex love and lust, but the hottest sex scene is the one in which Elio, alone in bed, masturbates into a peach. He and Oliver may have gotten more action than Freddie Mercury in Bohemian Rhapsody, but they still stopped short of anything that might have upset the Academy’s apparent prudishness when it comes to gay men and sex.

The Academy’s eagerness to nominate straight actors for LGBTQ roles as long as the characters keep their sex lives strictly PG-13 sends the wrong message to young gay males. It says, “Come on out of the closet. Just be sure to keep your clothes on and both feet on the ground.”