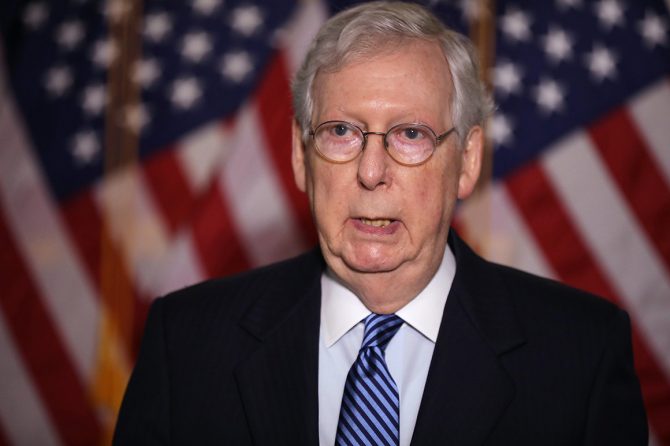 Yesterday, a disturbing photograph of the 78-year-old Senate Majority Leader’s hands went viral. At first glance, the hands appear to be covered in dirt and bandaids. But a closer investigation shows they’re actually quite swollen, discolored, and possibly gangrened, almost like they’re about to fall off from his body.

This photo of Mitch McConnell's hands from yesterday pic.twitter.com/9x5x2UhxvJ

Shortly after that, another deeply troubling photo of McConnell’s hands taken the day before began circulating online.

Whatever is going on, it’s not good.

The internet diagnosed a wide range of potential ailments, from someone who blew a vein trying to take blood, to someone on blood thinners or anti-coagulants, and beyond. Whatever’s happening here, it would appear that McConnell is possibly unwell and perhaps his primary focus shouldn’t be on rushing a Supreme Court Justice through her confirmation by Monday.

Twitter has had a lot to say about the matter…

Mitch McConnell: “They can have another stimulus when they pry it from my cold dead hands!”

Mitch McConnell’s hands are now as black as his soul.

You can’t convince me otherwise pic.twitter.com/Dkw0GlcQQf

Mitch McConnell’s hands. I’m more than a horror aficionado, I’m an expert. He is undead. I am filing my exclusive report with NYP as I type. pic.twitter.com/BlfAEvRZoc

His evil core finally seeping to the surface

But the horror show didn’t stop there.

Because not long after taking notice of McConnell’s decaying hands, people started noticing his melting face also appeared to be in the early stages of decomposition.

Not a top story but…
Mitch Mcconnell's face is falling apart. pic.twitter.com/KHPCFijRZK

Once again, Twitter had quite a bit to say about the matter…

Oscar Wilde famously wrote: by middle age every man has the face he deserves. To which I have to say: goddamn, Mitch McConnell.

If so, likely he is dying and I wouldn’t be surprised if he passes in the next few days.

Something is wrong with Mitch McConnell. The hands photos speak for themselves but this face shot….homeboy has tons of makeup on and is covering bruises and scabs. He is not. well. pic.twitter.com/8PY6aMiU1l

Mitch McConnell’s whole face is sinking into itself.

Always knew this would happen. Ghouls can only maintain a physical form for so long before their corrupted spirit cores begin to breakdown.

Of course, we would never wish ill on anyone. Never, ever, ever!

So instead, we’ll wish McConnell, who has spent the better part of the last decade trying to take away healthcare from millions of Americans, all the best in finding a manicurist willing to touch those tentacles.