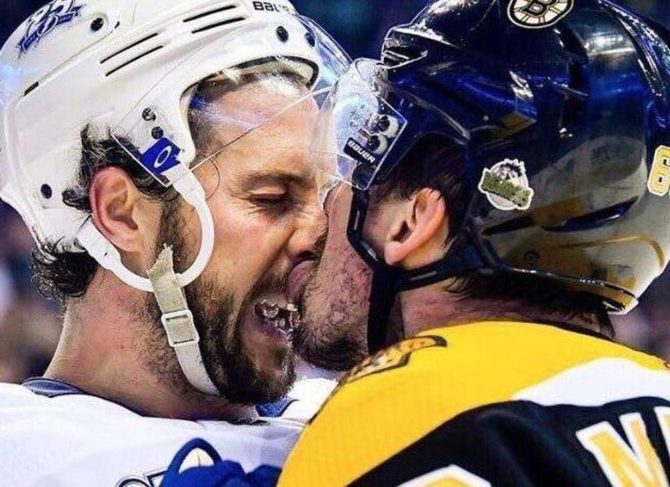 The NHL is currently being rocked by a homophobic licking scandal. People are not pleased with Boston Bruins winger Brad Marchand for repeatedly running his tongue across his opponents’ faces.

Afterwards, Marchand, who is his team’s appointed LGBTQ-community ambassador, explained why he did it, saying: “He keeps trying to get close to me. I don’t know if he has a thing for me or what, but he’s cute.”

A lot of people weren’t happy about the face lick, saying that, not only is it kinda gross, but it’s also kinda homophobic. Many feel intimate contact between two men should not be used as a form of taunting.

Despite purportedly receiving a call from NHL officials asking him to please stop licking his opponents on the ice, Marchand did it again last week.

During the Stanley CupPlayoffs, he licked the face of Ryan Callahan from the Tampa Bay Lightning.

After the lick, Lightning coach Jon Cooper shook his head and said, “There’s absolutely no place in our game for that. I don’t understand it. I don’t.”

Former hockey player Brock McGillis added, “Brad Marchand is using sexuality as a means to get under an opponent’s skin.”

He continued: “Fans are referring to it as disgusting, which an unwanted lick is. But the fact that sports news will be continuously showing a man kissing or licking another man in a negative light will set our community back in our attempt to find a place in male team sports.”

And Cyd Zeigler over at Out Sports writes:

Marchand could have easily checked Callahan, pushed him, or performed a list of other actions against him that wouldn’t have brought the ire of players and fans.

Instead, he decided to bring intimacy between two men into the equation. Given all the chatter over the last week, this was not a spur-of-the-moment action. He knew exactly what he was doing, particularly given that the tongue-in-cheek reason he gave for doing it before was that he found the other player “cute.”

Many are now calling for Marchand to be suspended for the Bruins’ next playoff game.

Related: Hockey team tweets, then deletes this video of player showing off his stick