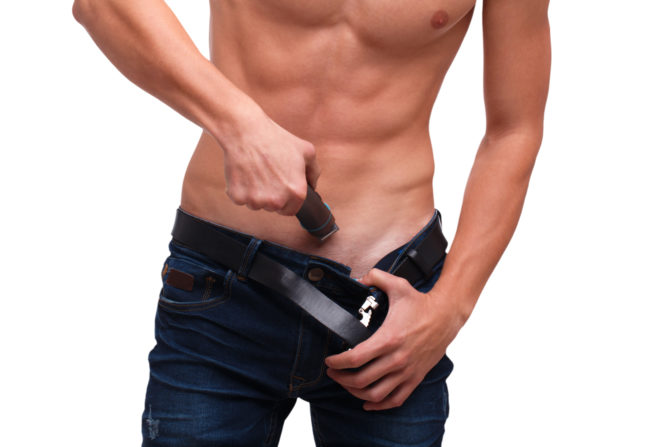 It started with a simple, sincere posting on Facebook: “How do you tactfully ask your new guy to trim his bush?”

But stylist/jewelry designer Christian, who wrote that query, was gobsmacked when he got over 1100 comments in response, ranging from helpful to downright vicious. Perhaps after a year of lockdowns and neo-fascism, it was a welcome diversion to talk about grooming.

Here’s my conversation with Christian [who will remain anonymous for the purpose of this article], which I’ve only trimmed a bit.

Congrats on making such pubic waves, Christian. First off, how did you hook up with this guy?

We met on a dating site. He’s a very sweet, Southern gentleman in his early 60s. To find somebody who’s single, has a stable life, and is open to a relationship, it’s almost like the holy grail. In one of our conversations, I asked him if he had a hairy chest because he has a little mustache. He said, “No, I’m totally smooth.” I said, “OK, that’s nice too.” On our second date,  we started fooling around and went into the bedroom. He took off his shirt—Yes, totally smooth. He took off his pants—Yes, his legs had very little hair.

Then he took off his shorts and it was boom, back to the 1970s! I wouldn’t say it was a Chia Pet, but it was definitely blooming. And I’m not used to this. So many guys manscape. And a lot of men I’ve been with didn’t have a lot of hair to begin with or they trim it. We had a very nice connection and sex was good, but this really threw me. When we were having oral sex [I had just tested negative and he’d gotten both vaccinations], it was a little hard for me to breathe at times. I was literally pushing the hair away from his cock, which is bigger than you’d think, but the hair covers it. It’s like the first time you encounter a piercing or someone uncut or curved and it’s maybe not what you’re used to.

Did you say anything?

No. I didn’t want to hurt his feelings and I know he has certain body issues. And I don’t have a perfect body at all. I’m at my top weight right now. If he said, “Why don’t you lose some weight?” that would hurt. But I have a feeling he’s been off the market and he’s getting back out there and maybe he’s…

So you posted about this.

I’m in this Facebook group, Gay Life After 40, and I enjoy it. I’d never posted before. And his bush was not a deal-breaker. He’s a great guy. But I thought, “Let me put it out there.” It’s not just me saying, “Hey, I need some attention or ego-stroking.” It’s a legitimate question I thought other gay men could relate to. Within an hour, there were over 100 comments. The overwhelming advice was Don’t make it a big deal. Have fun with it. Maybe you can trim each other or make it foreplay. Have a sexy self-care time together. That was really helpful and put me on a good track. I’d say 70% of the comments were positive. Twenty percent were, “Don’t even think about it–bad idea.” Or, “What’s wrong with a bush? Love the bush!”

All kinds of name-calling?

They said I was a nitpicker, an uptight prude, a bitch, or some fussy lady who nothing is ever good enough for. Someone snapped, “Why don’t you shave your eyebrows?” They didn’t read what I said, which was “trimmed”–I never said “shaved.” I just would like less. I don’t want him to be at zero. I’m realistic–men are men and you can’t change people. This might be what he likes and that’s fine. But a little less would make sex with him more enjoyable for me. I have a friend who’s into S&M and he’s afraid to tell his girlfriend. So what does he do? He finds it with someone else! I’d maybe like to bring it up rather than cheating on him with someone who has more of a body that I like. I’m not changing anything intrinsic about him–I like who he is–but maybe something a little cosmetic, and I’m willing to do the same.

When commenters say “Just find someone else,” that always trivializes the situation.

And I thought that was indicative of how gay men have been affected by pornography–the fact that on all the apps, you can just dial dick. You can order cock 24-7 and it can be delivered and come to you pretty quickly because it’s all set up by neighborhoods. So this idea arises that guys are totally disposable. “Just get rid of him, find another.” It’s not so easy. I can find lots of sexual partners, but it’s not that easy to find people I really like. My point was that hair is disposable, but people are not.

Didn’t some commenters accuse you of coming off like a pedophile?

A number of them were in the vein of “Why do you want a bald pubic area? Are you into adolescents? Are you stuck on puberty?” I replied, “I’m not into younger men. Actually, he’s 12 years older than me. I’m not looking for a teenager. That would be very inappropriate, illegal, and immoral.” They weren’t reading my question! I was so surprised that the comments kept coming. I had to turn off the notifications because my phone was literally jumping like a vibrator. What I got from this is that men are sensitive about their penises and pubes and also, they’re always eager to share their opinions, whether they’re helpful or abusive.

At a certain point, I realized, This has nothing to do with me. I’d just struck a nerve with the issue of body hair and how men feel about theirs. It boils down to, Do you want to know if your partner would like you to change something or not? Is ignorance bliss? Are you willing to accommodate someone or are you Take it or leave it? If this guy said to me, “I’d prefer if you wore less makeup or different clothes,” I might say, “OK, that’s not cosmetic surgery. That doesn’t require weeks at a gym or some major commitment.”

And I’ve done that with people—they liked my hair shorter or a little lighter or they bought me a cologne and wanted me to wear it. This question became a lightning rod for a lot of people. It was something they wanted to talk about and needed a way to do that.

What were some of the other outraged comments?

Another comment said, “You’re like Samantha on Sex and the City. You’re a man-eater.” They were making assumptions and projecting so much stuff on me–like I was going through men and making them do what I wanted, which was not the case.

It’s like when I tweeted a joke about Armie Hammer and someone commented, “You’re fetish shaming!” Really? So you can’t make fun of cannibalism anymore? Anyway, where do you stand now?

I might bring it up somewhere down the line. If he asks, “Do you like my deodorant?” –if we go into a conversation about likes and dislikes—I’ll bring it up, but otherwise, I’ll table it because it’s not worth the risk.

But are you glad you posted about this?

Yes, because two guys met on the thread and were telling each other how attractive they are and they were planning to meet up!

I hope they trim!

So today, he apologized for his overgrown bush and said he’d let it go during the quarantine. I calmly told him that I liked him either way, but thought trimming would be a nice idea. He said he’d do it next week! Yay!!!!

PS, from Musto: Dear readers, feel free to give me a mouthful on this topic!