A failed political candidate in Oregon has admitted he sent an ‘anonymous’ hate-filled letter to himself.

Jonathan Lopez, 29, lost a primary election for a seat on the Umatilla County Board of Commissioners in May 2020.

Following the election, on June 23, he posted a photo to Facebook of a letter he’d received. Parts of the letter had been blurred to hide offensive words. It began: ‘Mr Lopez, F*** you and your n***** and quire loving self.’ Quire is presumed to be a misspelling of queer.

The letter went on to say, “Your not welcome here and will never be anything in this community or state.”

“America is only for the great. You and your communist liberal community can go f**k yourselves and rot in hell.

“Umatilla County kills w******s like you and are dumped in the fields and river. That’s why our crops are the best! Don’t waste your time trying to become anything in this county we will make sure you never win and your family suffers along with all the f*****g Mexicans in the area!”

The letter was signed, “Sincerely, America.” 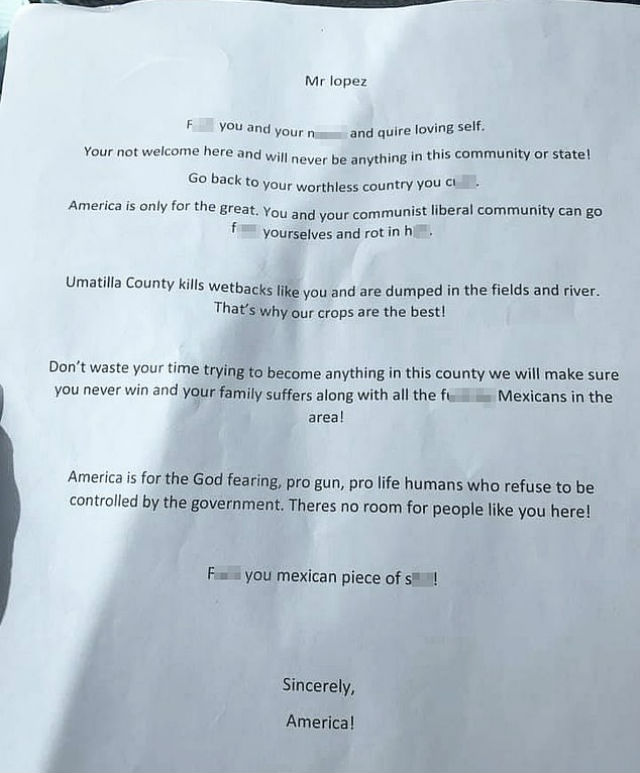 After posting, Lopez’s photo was reshared hundreds of times in the following 24 hours, reported KEPRTV. In the accompanying Facebook caption, Lopez talked about his experiences with racism.

“Many don’t know me or who I am and where I stand. As an American born man who served in the USCG, fire and rescue services. I’m also proud of where my parents and grandparents were born and raised, Mexico. I have lived a life full of obstacles and challenges Including racism. There is no room or tolerance of that.” 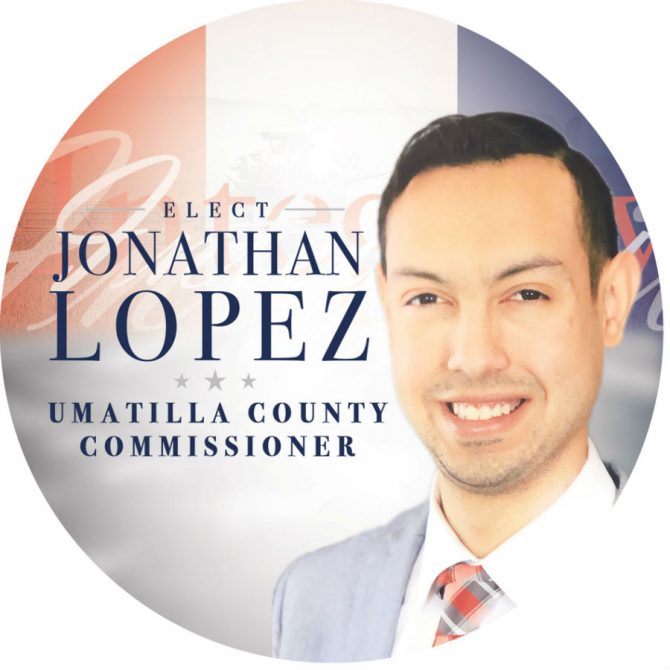 Lopez said he bore no malice to the author of the letter.

“I hold no resentment for whomever wrote this; I’m just simply heartbroken for the lack of knowledge, education and respect missing. I pray for you and wish you prosperity in your life. God bless us all!”

It now turns out the person who wrote it was Lopez himself. He handed the letter over to the police in Hermiston, who launched an investigation.

“From the onset, this alleged incident has been thoroughly investigated,” Edmiston said. “Our investigation has shown that Mr. Lopez wrote the letter himself and made false statements to the police and on social media. The end result is a verbal and written admission by Mr. Lopez that the letter was fabricated.”

All of Lopez’s social media accounts now appear to have been deleted, along with his campaign website.

Lopez told the East Oregonian he had, “never meant to mislead the public,” and the letter was supposed to be an example of the sort of discrimination and racism some residents face. He had taken it to the police to discuss racism in the community, but, “I never meant to file a report, it just kind of spiraled out.”

In a statement sent to Newsweek, Lopez apologized to the community in Umatilla for his “wrongful doings.”

“The letter written by me came from a dark low place … It should have never been written.”

He went on to say he had accepted that he, “was not suited or fit to be in public office or leadership,” stating that he has been, “dealing with many emotions, feelings, and thoughts for several months.”

Chief Edmiston told Newsweek details of the case had been forwarded on to the Umatilla County District Attorney’s office for review for initiating a false report.