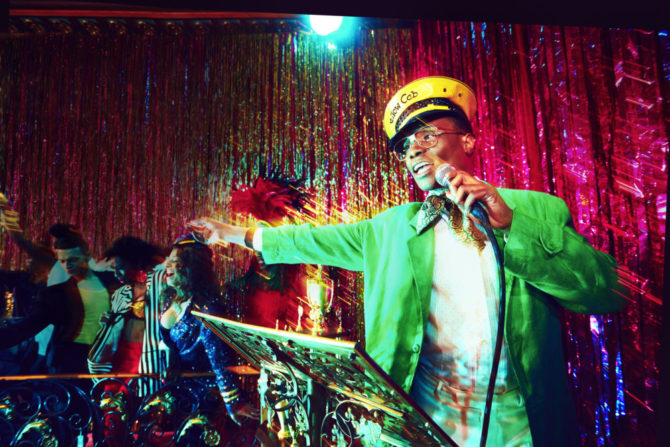 Billy Porter’s voice has won him both a Grammy and a Tony for his performance as Lola in Kinky Boots on Broadway.

On FX’s groundbreaking Pose, Porter cedes the thigh-high stilettos to the cast of trans actresses whose characters compete in the uptown balls of 1980s New York, but his voice still looms large. Not only does his character, Pray Tell, serve as the ballroom emcee, announcing categories and throwing shade; he’s also responsible for the call to arms that accompanies the opening titles of each episode. “Live! Work! Pose!”

“I am the voice of Pose!” Porter confirms.

Like his character, Porter is razor sharp and quick to laugh. The Broadway veteran is a truth-teller who wants you to know the score because it will make you better. Ahead of Sunday Pride and that night’s episode, which features a major turning point for Pray Tell, Porter reached out to Queerty for a candid conversation about ball culture, the restorative power of celebration, and why he just doesn’t give a fuck anymore.

In a lot of ways, Pose isn’t just a new show. It’s a new show that puts queer and trans people of color at its center—both characters and actors—and so there are a lot of hopes and expectations surrounding it. What is it like being on a show with so much riding on it?
That’s interesting… I’ve been in this business for over 35 years. I have learned that the anticipation for what people may or may not think—all I can do is stay focused on the work, and make sure that the work is exquisite. I am proud of this work, and I have to let it go so that I can remain sane! [Laughs] I’m trying to do the best version of that that I possibly can.

There is a lot riding on it. I never thought I’d see this day. I never even knew how to dream of something that looks like this. The gift is that. Our story is being told, the story that everybody told me would never be told.

It’s your voice in the title sequence, right? You basically open each episode.
Yes it is. Yes I do! I’m the voice of Pose! 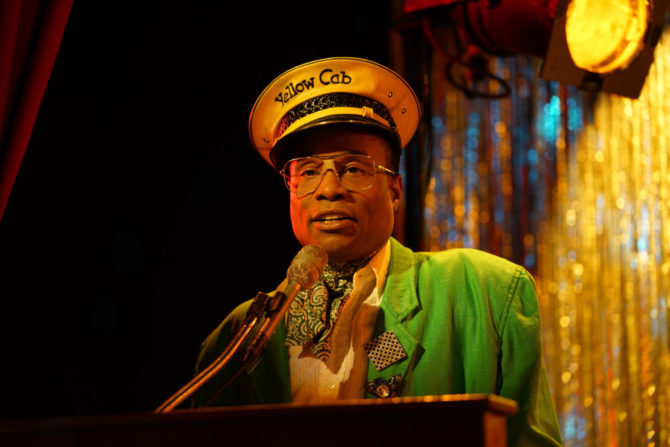 How do you describe ball culture to people who are unfamiliar with it?
I describe it as a community of disenfranchised people, the forgotten ones, who have found each other and have chosen their families, and have chosen to take care of each other and have chosen life. They’ve chosen to celebrate life in the midst of, very often, the harshest of circumstances. That’s always been the thing that has drawn me to the culture. You know, being black in America and being gay in America and being trans in America, there’s a lot going against you. So the conscious choice to celebrate life is, I think, at the heart of this scene. And we see these people making that choice every week.

Where were you in 1987 when Pose is set?
I was at college at Carnegie Mellon University in the drama department, and I was also spending my summers here in New York trying to get ready for the big move [here].

You’ve talked about going to balls back then. What was your impression of the scene?
I didn’t actually go to the ball until after Paris is Burning. I didn’t know anything about that because, you know, I grew up in Pittsburgh! I didn’t know anything about the ball culture until Paris is Burning. And it was the first time that I had seen anybody, really, that looked like me, anywhere. These people looked like me, these people were gay, they were living out loud, fully and proudly and fearlessly. So, to me it was about finding the right kind of people and showing up for the energy.

I was doing Broadway shows, so I was ball adjacent. [Laughs] I was at the clubs in the late 80s and 90s. This was another stop on that [circuit].

I think you’ve mentioned that you never actually participated. Why was that?
I wasn’t a part of a house. I actually was going for research—I was working on stuff and researching.

Oh, you were a tourist!
I was a tourist. I was not ready to walk in any balls. I was not prepared at that time for the realness! [Laughs]

It is obviously well past time that the stories of LGBTQ people of color were told. But, what is it like to see ball culture entering mainstream awareness? Is it just a little bit bittersweet?
No, because this show is about reclaiming. Reclaiming our time and reclaiming our space. Because truth be told, the culture has been stolen, and coopted by many of our lovely pop stars, fashion houses. It has been a contributor, a major contributor to the culture with no acknowledgement. That is what made me mad. What we’re doing is taking ownership of what has always been ours. House of Gaga. House of Dereon. Madonna—she found her dancers in the culture and then changed her phone number the day the tour ended. You see? We’re taking it back. 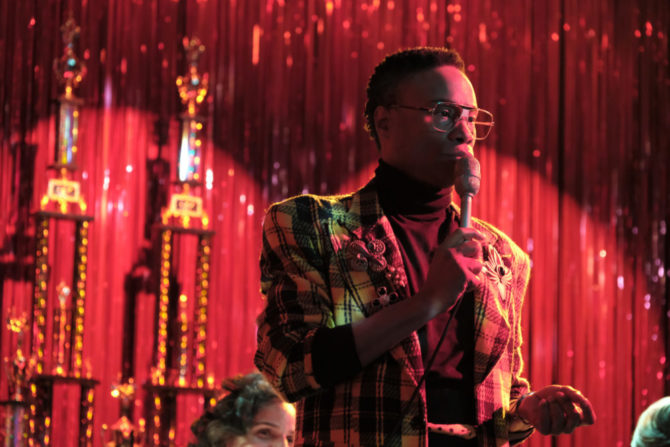 What is Pray Tell’s role in the ball scene, and in the community more broadly?
He’s like the grandfather, grandmother, mamma of everybody. The balls are a place where all the families come together to celebrate and for fellowship. And Pray Tell oversees all of that and makes sure the community stays together. He’s the glue that helps hold us together. That’s the way I’m playing it! [Laughs]

What about his role as the emcee at the balls? What does that job entail?
Well, he’s the Pied Piper. He’s the pastor. He’s the emcee. He’s the one who’s in control, who keeps the flow going. He keeps everybody in check. He’s the head bitch in charge! [Laughs] It’s a very powerful role.

In Sunday’s episode MJ Rodriguez’s character Blanca kind of pushes him to take a more active role in the lives of the cisgender gay boys in the House of Evangelista. What can you tell me about that storyline?
You can’t talk about LGBTQ people in the 80s and 90s without investigating the plague and what it was doing to the community. And we dive in. We dive right in as you saw in Episode 1, when Blanca gets her diagnosis. Just like we did at the time, we had to come together and support each other as best we could in the terror, in the pure, sheer terror. To choose life in the midst of that kind of situation, when everything around you is terror—the idea that loving somebody could get you killed—that’s what this is about. It reminds us of those who didn’t make it. Every day I show up to set and I feel so blessed to be able to tell this story, to represent my friends who didn’t make it.

It’s a really interesting parallel to what’s going on right now. We’re about to celebrate Pride here in New York and I can’t help but feel a little uncomfortable celebrating while there is such inhumanity happening right now on our southern border. It’s like, do we have a right to celebrate while children are being terrorized?
You have to celebrate. The choice to celebrate is fuel! You can’t fight if you’re under nourished. Celebration is nourishment. Nourishment! We have to take care of ourselves so we can go to the front lines and fight—to the death!

What’s next for Pray Tell this season?
I’m just gonna say that Pray Tell is going all the way through it. He really has the HIV/AIDS storyline. That’s addressed through my character.

Do you have a sense of what the future holds for the series beyond the first season?
I don’t. Like I said earlier, I’m just trying to focus on the work and not lose my mind! [Laughs] Who knows, honey?

Murphy is giving his profits back to the community. What can you tell me about that contribution? Where is he investing that money?
From what I’ve read about it, he’s choosing all different kinds of LGBTQ organizations that need help and funding. The government is not doing it. We have to step up, those of us who have power, and use our power for good. He is a use-your-power-for-good kind of guy. He always has been. And I think what is the most useful is that nobody can come for him now in terms of him being a white man telling these black stories. All that shit that you get, he shut it down! [Laughs] He shut the shit down. There is no question about intention. The intention is clear, it’s in the right place.

It’s unfortunate, but that’s the way it goes sometimes. I’ve been say it about the whole movement right now in general: White people are mad now, so maybe something might get done. We’ve been saying “black lives matter” for year, and nobody listens!

The show is a rarity in that all of the trans characters are played by trans actors and, as far as I’m aware, all of the gay characters are played by out actors. I’m curious how you feel about straight actors being cast in gay roles when it is still comparatively hard for out actors to be cast in mainstream TV and film at all.
Yeah, I mean, it’s bullshit! It’s been my whole career! It’s changing for the better, but you know, there’s always a lovely straight actor who’s blessing us with their presence and playing somebody gay so they can win an Oscar. [Laughs] You know, straight people win Oscars for playing gay people. Gay people can’t get a job!

So, I think it’s changing. It’s evolving, and I think this show is an example of that.

Is it important to you to be able to play straight roles?
I don’t give a fuck anymore! I don’t care. There was a time when, you know, it’s like, straight is always better. So, fuck it. Nobody says to a straight person, “Oh, aren’t you gonna be pigeonholed by playing straight?” I’m gonna own everything that I am and be as truthful and honest as I can in my life, and let the chips fall where they may.

And I think these chips are pretty good! [Laughs]

Kay Cannon on reinventing ‘Cinderella’ with a contemporary, queer twist