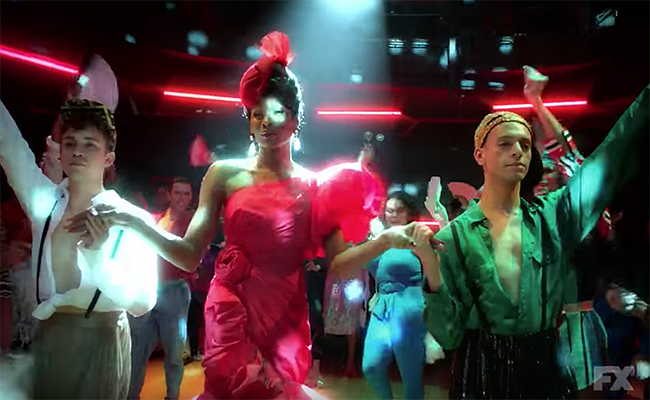 In FX’s Pose, the early Trumpian era of decadence meets the city’s gritty queer underground. And to illustrate the story, Murphy has assembled a talented cast of young faces, featuring the largest trans cast on television, delivering on his promise to bring diversity to the small screen.

One such face is that of Hailie Sahar, who portrays Lulu Abundance. Second in command to house mother, Elektra, she quietly yearns to start her own house. It’s that understated passion that shines through in Sahar’s performance.

In her own career, Sahar has overcome many obstacles, fighting for quality roles as a trans actress. With roles in Transparent and Mr. Robot, she also starred in the Off-Broadway production of Charm. But her role as Lulu Abundance is undoubtedly a star-making performance.

Queerty spoke with Sahar about her career and the groundbreaking new FX show, premiering Sunday, June 3 at 9 pm on FX.

Tell me about your character and how she fits into the dynamic of her house and the ballroom scene.

My character is Lulu, and she’s from the House of Abundance. I would describe Lulu as a very fashion-forward girl. You’ll see her in her outfits, whether she’s delivering lines or she’s in the scene, she’s the one who’s always wearing something hot. And she keeps her nose in the books, as far as Vogue Magazine and stuff. Lulu’s personality, I would describe as like a lioness. Before a lioness hunts its prey down, she stalks it first. Lulu’s one of those ones that you always wanna look out for.

What was it like joining this legacy of Ryan Murphy’s amazing shows?

Oh gosh, Ryan Murphy has been one of my favorites for I don’t know how long now. For me personally, as an artist, it was a dream come true because it’s on my to-do list. (LAUGHS) I love Ryan Murphy, and he is one of the people I dreamed of working with. So, for me, it’s a dream come true. I always love working with someone who brings authenticity to the project, and Ryan is one of those people. He’s one of those people who wants to get it right. He’s one of those people who wants to stay true to the storyline and make it as raw and real and gritty as can be. And I love being able to go there as an artist.

What was it like getting into 1980s New York fashion and reliving that ballroom era every day?

The 1980s is one of those times that I think any artist would dream of because it’s the era of big fried hair, big shoulder pads, tacky makeup, and creativity. And as an artist, it allows you to kind of push the envelope. You pretty much don’t have any barriers when it comes to your creativity because the ‘80s were all about being creative and ‘How big can I get my hair? How much more outlandish can my outfit be? Can I bring my eyeshadow all the way up to my forehead?’ It was an amazing era, so it’s fun and interesting and it allows me the opportunity to really dive into my creativity. And I love that.

What kind of research did you do on the era and the ballroom scene of the time?

For me, it was a mixture of calling my mother, asking what’s the vibe of the ‘80s, as well as several other people in my family that were alive during that time. I kinda wanted to know the vibe of that generation, what they were doing, why they were doing it, just so I could embody Lulu in my own personal way. As far as ballroom, I myself have some experience in the ballroom scene. I discovered ballroom when I was about 18 years old, and I was actually the mother of a house. I was the youngest mother ever at the time. I was the mother of a house in Los Angeles, by the name of Rode’O. I’ve stopped doing balls, but the ballroom scene has made me who I am today, allowing me to discover myself at that early of an age.

How would you say the ballroom scene you came up in compares to the scene of the ‘80s?

I mean it compares because it’s always the same. It’s really a group of people who have been cast away, with dreams and hopes. It doesn’t change. The whole narrative doesn’t change. When I started, I was all by myself, and I saw something to grab hope to, something I could believe in. It was a space that allowed the freedom for me to express myself. It’s a beautiful thing if you really utilize it.

Do you feel there’s a difference between the ballroom scene and the drag scene in how they treat trans people?

I for many years had a difficult time getting work because I was sexually harassed. I was discriminated against, more so sexually, when people found out that I was trans. When I started going out for jobs, they tried to push themselves onto me in a physical way. So, for many years, I made a living doing drag, even as a transgender woman. Because in drag, you put on a costume and portray something you usually can’t. I grew up in a very religious and strict family, so I haven’t seen or spoken to a lot of my family in over 12 years. A lot of getting out my frustration was in my work of putting on drag and performing songs that were sad and allowed me to own my pain. So, for someone, RuPaul or anyone, you cannot tell people they don’t belong in drag, because that’s the way a lot of us have made a living when we could not find work in other places. I believe that anyone can do drag. Nobody owns anything in this world, whether it’s drag, whether it’s a job, whether it’s a bathroom. Nobody owns anything.

This is all our world.

How does it feel to be a part of this show that’s providing such a huge platform for trans actors and telling trans stories during such a pivotal time?

I know I’m doing something very historic, so it gives me a sense of diligence and determination to portray not only my character but myself in a manner that sheds light on transgender people in a respectful way. I feel honored because I’m one of those people who believes nothing in this life happens by chance. I think that each individual person, especially the five leading ladies of this show, were selected for a divine reason and purpose. But being part of this show, being one of the leading ladies, lets me know that I’m doing something correctly in my life, that the universe selected me to be a voice, to step forward. We’re all in this movement together, and we all have a sense of duty. The message I want to get across is very simple. It is love and acceptance. So being selected to be one of those people just lets me know that I’m doing something right, that the universe saw that in me because it could have been anyone in my position. I feel very blessed.

What was the atmosphere on set with the cis actors and crew as far as educating?

I love this question. I always chuckle when someone asks me because being on set, being part of an ensemble of cisgender people and transgender people, it really is a family. I know that sounds cliché because everyone says that. But if you ever have a chance to come to set, you’ll see exactly what I mean. Everybody leaves room and space to learn, which is a beautiful thing. I remember early on, conversations we would have, people would ask questions because they didn’t understand or they wanted to know, in a very respectful way, as far as my experience goes. But aside from that, the cast and crew, everyone there is so silly, so loving, so supportive. We encourage each other. It’s a loving environment, and that’s how it should be. That’s how the world should be.

What has your experience been as a trans actress, finding meaningful roles?

Well, I’m an actress who just happens to be trans. I don’t lead with that. But for me, going after roles, the only thing that I personally have endured, when I was early in my career, I was looking for an agency. And they took my resume, and they saw things I’d done and took the meetings with me. But whenever I would get hired by someone, I would disclose my truth, just in case there’s anything and they have my back and know what they’re signing up for. I didn’t want to trick anyone, or whatever my mentality was at the time. And as soon as I told them, I experienced a lot of sexual harassment. I experienced a lot of producers and companies that were very inappropriate with me. I also experienced a lot of agencies telling me they had no room for me because there was nowhere to place me and I was going to be a liability to their company because I would bring harm and danger if clients ever found out I was transgender. I experienced a lot of discrimination as far as that goes. But if I didn’t say anything to anyone and they didn’t know I was transgender, everything was fine and they’d treat me with respect. But as soon as they found out, it became a very sexual environment. It was very hurtful to me, especially at that age. I was a teenager when I started my career, and there were grown men coming on to me. It was very scary.

I’m so sorry you went through that. But I’m glad you found such an amazing role and show to be part of.

Definitely. After hearing all that, this feels like a dream come true. Because I’ve worked very hard, and I’ve sacrificed a lot to be in this position. I was one of those people who never went out clubbing and partying. I was at home, studying Shakespeare. It’s a big breakthrough for me, and this puts me in a position to have a voice.

And it feels great.

the wages of sin
2K shares

Part of your world
11