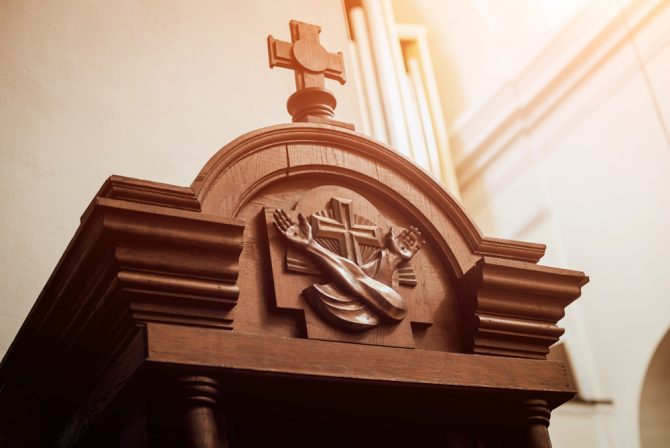 A Detroit-area Catholic priest was just sentenced to 45 days behind bars for initiating gay sex with a younger man who went to him for counseling.

The incident happened in January 2013 at the St. Theodore of Canterbury church in Westland, Michigan. 55-year-old Rev. Patrick Casey took advantage of a 24-year-old man who had come to him for assistance reconciling his homosexuality and his faith. But instead of helping the guy, Casey decided to have sex with him right there in the confessional booth.

According to the criminal complaint:

As John Doe (the victim) spoke about his struggles with suicide and his concern about dying in mortal sin, Casey, who was dressed in black clerical garb, steered the conversation towards sex, telling him that he could not have a gay relationship and go to heaven. Casey told John Doe that he was also gay and shared a suicidal story of his own. During this confession, Casey approached John Doe and told him to stand up.

From there, it is alleged Casey “began massaging John Doe’s genitalia before performing oral sex on him.”

It wasn’t until years later that the man finally found the courage to tell the Detroit Archdiocese what had happened. A formal investigation was launched, during which Casey was interviewed and admitted to everything.

Last month, he pleaded guilty in court to a misdemeanor charge after a jury said couldn’t reach a unanimous verdict on a felony criminal sexual conduct charge.

This week, a judge sentenced him to 45 days in jail plus one year probation.

In a written statement to the court, the man, now in his 30s, said he doesn’t blame Casey entirely for what happened, though he does believe he is at least partially responsible.

“I’m not blaming all my problems on him,” he wrote. “I was messed up before I ever met him.”

“But he could have helped. And he chose not to. He contributed to it instead. For the next several years I drank heavily and constantly to cope with the pain and rage I felt.”

Casey has been removed public ministry and has been barred from representing himself as a priest or conducting any sort of church ministry while his case remains under canonical review in Rome.