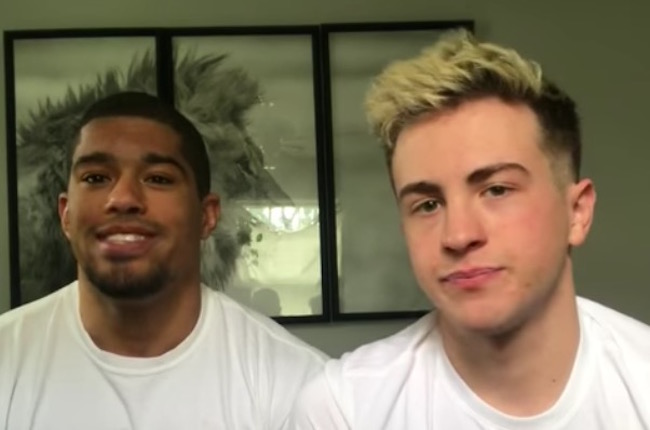 #waybackwednesday to my @impactwrestling debut sharing the ring with @buckneverstops. Catch us this Saturday Sept 9th in Rahway, NJ for @wearewrestlepro. T-shirts, 8 x 10's, and magazines will be available!! Photo Cred: @bobmulreninphotos

The couple, still very much together, decided to address a few questions they’ve received from fans in recent months – particularly how they met, which is quite the tangled tale.

Dropped 14lbs and body fat from 21% to 14%…still a little more work to be done. There's more #goals to be achieved!

“I was in the closet at the time,” Bowens says, “and I was scanning through Instagram when I came across his profile.”

He wanted to send Pavano a message but was initially apprehensive. Finally, he worked up the nerve and sent a DM.

Related: Pro wrester Anthony Bowens talks bi-erasure and the ‘stimulation’ he feels for men and women

Then, wouldn’t you know it, he learned Pavano was in an on-again/off-again relationship with some other character.

One year ago today I took a chance of going down to meet @michaelpavano for the first time the night before his birthday. I had no idea I'd be meeting the love of my life. Thank you for finally making me the happiest person in the world. And yes we are wearing the same shirt like marks lol.

“It was the last break that we took before we made it official that it was over,” Pavano says. “And that’s when I met [Bowens] and was instantly attracted to him. I was just like ‘wow’.”

“I even told my ex at the time that I was so attracted to him as soon as we got back together after that break.”

This is my "it's the weekend" face lol Photo Cred: @bobmulreninphotos

Well, Pavano’s BF at the time was none too pleased to hear this news, sending Bowens a message effectively saying, “I would really like it if you didn’t message him any more.”

So Bowens deleted both Michael and his BF from his account, and went about his wrestly ways.

He didn’t hear from Pavano for three months. Then one day, The Friend Request came.

Bowens met Pavano a day before his birthday at a bar and the two men “instantly clicked.”

A second date, this time at the beach, made them realize they had much in common.

“That day I knew this is the guy that I can see myself with. He is so spontaneous, he’s so fun; he’s up for anything.”