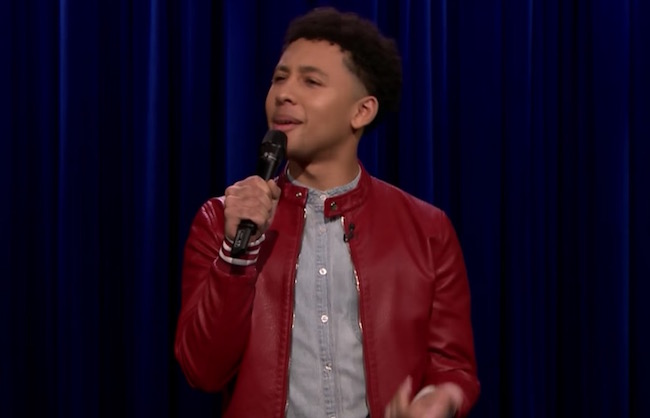 Familiar with comedian Jaboukie Young-White? If not, you’re living a futile and empty existence in which every step is another desperate lunge towards eternal shrieking nothingness.

The 23-year-old comedian has been delicately assembling thousands of fans and followers on social media, due in no small part to his understated wit and superior meme-making abilities.

Now, he just made his television debut on The Tonight Show with Jimmy Fallon, and he wasted no time in delivering the goods:

“I’ve been traveling a lot recently,” he began, “which is fun but it’s weird.”

Unsurprisingly, he has some words about our current president:

“I kind of feel like ever since Trump won everything I do is radical just because I’m a minority. Like I wake up in the morning: revolutionary. I ask the cashier for a cup of water but I low-key get some Sprite: anti-capitalist.”

And though we never thought we’d live to see a time when labels like “masc” are mentioned on national television — not to mention war stories about having gay sex with Uber drivers — Young-White offered up both, and in abundance:

“I can be kind of an awkward flirt sometimes,” he says.

“I could have a hard time flirting just because people don’t always read me as queer when they first meet me because I’ve been told that I can come across as ‘masc’ and if you don’t know what that means it’s basically just gay for ‘I’m not like other girls. It’s like a little weird but I actually really like whiskey. I’m kinda quirky.’

I’m just fully trying to hook up with Uber drivers and like the other day y’all like I got so close. I get in the car. The guy’s cute. He’s like, ‘Oh, where you coming from?’ And I was like, ‘I was at a show. I do stand-up or whatever,’ and I say, ‘Or whatever’ so he knows that I’m humble. And then he goes, ‘Oh my god. I love stand-up.'”

And that’s when things get truly bizarre.