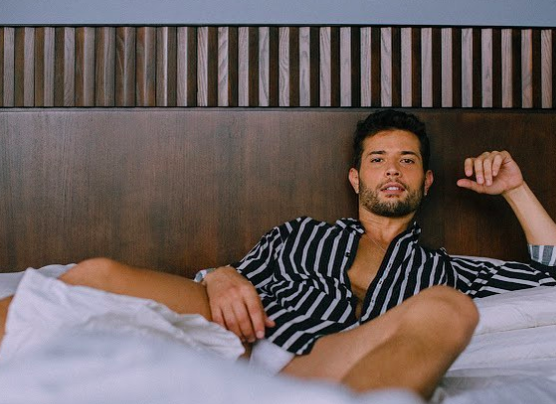 The Venezuela-born actor currently plays Sam “Sammy Joe” Flores” in the CW’s reboot of Dynasty. Before that, he played Jussie Smollett’s love interest, Michael Sanchez, in Empire, and Ricardo Canto in Dustin Lance Black‘s ABC miniseries When We Rise.

While he’s “laser-focused” on filming season two of Dynasty at the moment, which he promises will be a “rollercoaster”, De La Fuente did take a few minutes to talk with Haute Living about the show, his life, and minority representation in Hollywood.

“There is so much coming,” De La Fuente teases about the current season, which premiered just a few weeks ago. “This season has definitely brought that Dynasty dramedy it’s known for to a whole new level with the comedy being funnier and campier and the dramatic situations having higher stakes.”

Had an awesome shoot at @drakestakes ‘s rooftop in NYC?? . . . Style—> @delafuentea

Asked about how he thinks the new Dynasty, which won the People’s Choice Award for Best Revival, stacks up against the original, De La Fuente says he’s proud of what he and his castmates have created.

“We have created something that stands on its own yet it constantly pays homage to the original,” the 32-year-old says. “It lives in the campy primetime soap tone that people loved from the original, with the heightened language and one-liners, plot twists and cliffhangers galore, yet up-to-date and diverse.”

“I think that is the key point when it comes to how it has changed for the better; it is much more inclusive and diverse as far as race, nationalities and lifestyles. Proof: Sammy Jo 2.0 is now a gay Latino immigrant. Talk about intersectional minority representation!”

But while he’s found great success in the United States, De La Fuente says Venezuela will always be “home.”

“I have Venezuela in my heart always,” he says. “My country is going through a severe crisis and even though I have been away for 13 years, it is with me every day.”

He adds, “The Venezuelan situation has changed the life of all it’s people, my parents had to leave after an entire life and career there. Venezuelans take Venezuela with them wherever they go, the music, the food, our warmth and our parties. I love my arepa breakfasts often.”

Y u mad tho? ?—> @alejandroibarraphoto

Daydreaming of playita this Monday.

Sunday stroll on a Monday? ?–>@nikolasnc

Nothing more, nothing less… #transpeoplearenotaburden #transisbeautiful