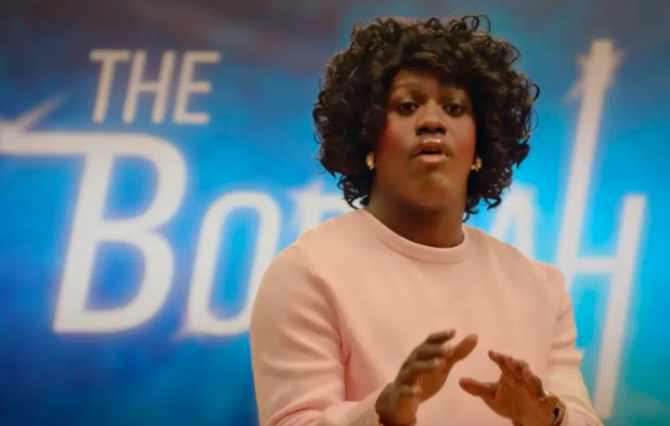 Rapper Lil Yachty is not here for anyone’s homophobia.

The 22-year-old was hit with a tidal wave of negative criticism after impersonating Oprah Winfrey in his new music video, “Oprah’s Bank Account.”

In the video, which includes cameos from Drake and DaBaby, Yachty appears as a female talk show host named Boprah, complete with a wig, dress, heels, and pearl earrings.

Related: Is this Drake’s Grindr photo?

Many people have taken issue with Yachty’s costume in the video, firing off angry tweets, many of which are laced with homophobia and antigay slurs.

This nigga lil yachty is gay. How you dress up as a whole woman for your entire video

It’s gay and he has a influence over young minds, he’s subjecting them tho that behavior thus normalizing it… that’s not cool, we get it you’re a little sweet bro

Lil Yachty fell off and now he gotta put on a dress to sell records ????? pic.twitter.com/2llk9WjWhF

That nigga lil yachty a whole fag for what he did

Lil Yachty fell of so bad that he had to dress up like a woman to get recognition smh pic.twitter.com/oOPN9QN0bf

Eventually, Yachty issued a message to anyone who has a problem with his Boprah costume: “Bitch it’s just supposed to be entertaining,” he tweeted. “It ain’t even that deep.”

He went on to imply that people who are uncomfortable with a man dressing in women’s clothing need to rethink how they view masculinity.

Bitch it’s just supposed to be entertaining… it ain’t even that deep, y’all Nigga’s so in denial with y’all masculinity shit like this bother y’all.. relax https://t.co/Ql2NZCdY1C

In 2017, Lil Yachty received backlash when he featured a gay couple kissing on the cover his album Teenage Emotions.

At the time, he responded to critics by saying, “If you have vitiligo or if you’re gay or whatever it is, embrace yourself. Love yourself. Be happy, positive.”