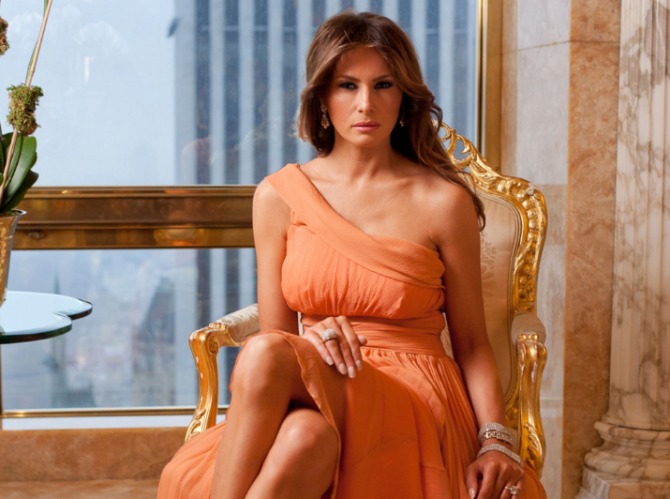 Hey, remember when Melania Trump refused to move into the White House after Donald Trump first took office and instead stayed for six months in her luxury apartment at the top of Trump Tower in New York City?

She said it was because she didn’t want to pull 10-year-old Barron out of school mid-year. But it turns out it was actually because she was renegotiating her prenuptial agreement. At least, according to a new book by a Pulitzer Prize-winning Washington Post reporter.

In “The Art of Her Deal: The Untold Story of Melania Trump,” Mary Jordan claims Melania was pissed off about all the dirt that came out during the 2016 presidential campaign, particularly the stuff about her husband cheating on her, running around town with Playboy models, and bragging about sexually assaulting women, and she needed time to “cool off.”

Jordan also claims Mrs. Trump wanted to “amend her financial arrangement with Trump” to ensure that little Barron wouldn’t be shut out of the family business or cheated of his inheritance like Trump’s forgotten fourth child, Tiffany.

Related: Melania Trump is outraged over being depicted as a stripper in music video

“She wanted proof in writing that when it came to financial opportunities and inheritance, Barron would be treated as more of an equal to Trump’s oldest three children,” writes Jordan.

A spokeswoman for the First Lady, however, says this is absolutely 100% not true.

“Yet another book about Mrs. Trump with false information and sources,” Stephanie Grisham, Melania Trump’s chief of staff, said. “This book belongs in the fiction genre.”

In the book, Jordan also writes that Melania is just as egotistical and myopic as Donald, which is probably why she’s managed to stay married to him for longer than any of his other wives.

“Both are avid creators of their own history,” Jordan writes, adding that the whole #FreeMelania hashtag is pointless since she doesn’t want to be freed and is, in fact, very content with being a trophy wife to the most powerful man in the world.

“She is … much more like him than it appears,” Jordan adds. “They are both fighters and survivors and prize loyalty over almost all else. … Neither the very public Trump nor the very private Melania has many close friends. Their loner instincts filter into their own marriage.”