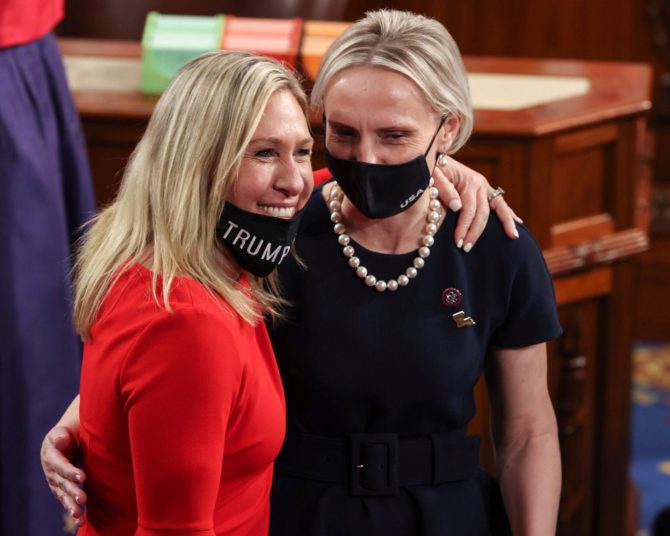 The newly-election U.S. Representative from Indiana appears to be auditioning for a place in the GOP’s cast of crazy characters, alongside people like Lauren Boebert, Matt Gaetz, Marjorie Taylor Greene, and Gym Jordan.

Yesterday, Spartz, who has a 100% rating with the antigay hate group Indiana Family Institute, gave an impassioned speech to reporters during which she complained about how politics works.

Since arriving in Washington, D.C. in January, the congresswoman has found herself disenchanted by the political process and how challenging it is to find solutions for things like immigration reform.

Because that stuff should be toooootally easy, right?

“As a freshman, I’m very, very disappointed,” Spartz whined. “I’ll do my part and I hope you’ll do your part to put pressure on the other side that we’ll get to work.”

Spartz, who immigrated to the United States from Ukraine in 2000 yet still supports Donald Trump‘s border wall, also feigned outrage at Speaker Nancy Pelosi for being “the only one who runs the show.”

Running the show, of course, is the job of the Speaker of the House.

She then went on to say Pelosi needs to “realize that President Biden is in charge right now, not President Trump. So, they need to start governing this country, not playing politics.”

We’re pretty sure Pelosi knows this, but thanks for the reminder, Vicky. Now maybe you could let your Republican buddies who still insist Trump won the 2020 election know?

Compared to some of her colleagues, Spartz gave a pretty lackluster performance yesterday, but she’s clearly trying to brand herself as a feisty new member of Congress who isn’t afraid to own the libs and “tell it like it is.”

What is happening at our southern border right now is unacceptable and un-American. @POTUS Biden needs to govern, and @SpeakerPelosi needs to stop playing politics so we can make real reforms to our legal immigration system and legal infrastructure. https://t.co/M3vcWztY3s

In February, she gave a similarly angry speech on the House floor when she voted against the Equality Act, but her remarks didn’t get as much attention as they probably should have given how shockingly transphobic they were.

Spartz went over her allotted time as she railed against the bill’s language on gender identity saying it could be “taken advantage of by criminals or sexual predators” and may endanger women’s prisons and shelters as it would “force them to share traditionally women-only spaces with biological men even if a biological male fraudulently gains access.”

She also said the bill threatened female athletes’ safety as “men, biologically, are stronger than women” and because “biological males and biological females are materially different.”

She concluded her transphobic tirade by saying that, despite its name, the Equality Act was “a giant step back” for equal rights and posed a major threat to religious liberty.

In its current form, the broadly written so called Equality Act creates potential inequality for women. Also, this is yet another bill which didn't go through the proper process and was sent directly to a vote by @SpeakerPelosi. pic.twitter.com/28Ikph65Gt

It should come as no surprise that Spartz also opposes adding sexual orientation to nondiscrimination laws, believes antigay Christian values should be used as the framework for all government, and thinks too many “special interest groups” (read: Black people) use the “race card” to achieve political gains.

We have a sinking feeling we’re going to be hearing a lot more about this woman in the near future.